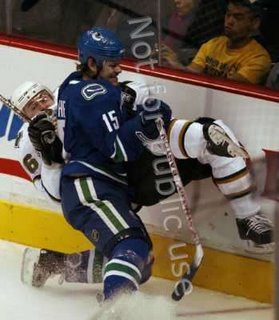 The Canucks are probably not interested in bringing back the feisty guy and he is set to become an unrestricted free agent in July.
I was fairly impressed with Ritchie last season, actually. Not bad at faceoffs. Can kill penalties. Rough and tough playing style. He's a good role player. He was cheap: $675,000. Would have kept him, myself. He's like a Dallas Drake.
I suppose the Burnaby BC native needed to score a little more than 3 goals and 11 points in 71 games though, huh?

The original source of the story is from a Swedish news site (Dagbladet.se). The article is saying that Timra had lost a lot of depth at center (including Riku Hahl, remember him?) through trades or whatever, so they are scouring the NHL for affordable centers. Lord Byron of Ritchie just happens to be one of them.