Share All sharing options for: Sean Avery not gay 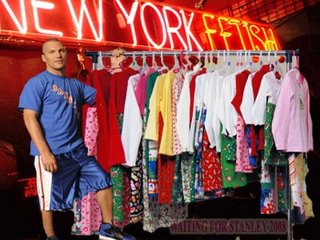 When a man has an intense love for fashion, there is no doubt that people will question his sexual preferences at some point. It looks like Sean Avery's sexuality (somewhat jokingly)is in question right now. Here are a few excerpts from his article (diary) in Men's Vogue:

Everyone I've told about this dream of mine has been asking me: "Why would a 28-year-old pro hockey player want to be an intern at Vogue?" I guess the answer could be complicated, but to me it's simple: I like clothes. Always have. What started innocently enough with my first tie-dyed Chip & Pepper shirt at age 12 has evolved over a decade and a half into a closet full of Dries Van Noten, YSL, Dior, and Costume National, to name just a few. (Strange as it may seem, I think women's clothes are especially interesting — there are so many options, and they can tell more of a story.) And somewhere along the way, this love of clothes led me to what's become known as "the bible of fashion."

I assisted on a fashion shoot at a beach club in Long Island featuring an award-winning designer. As I watched the shoot progress, I had to wonder: Was the feeling this designer had — the pride of having his creations shot for the pages of Vogue — anything like the feeling I had after we beat the Devils in round one? To have done something to make yourself happy, and to have given others enjoyment too, was so great, so satisfying. Was a young woman's anticipation of a night on the town in her favorite new dress just a different version of a 12-year-old boy watching his favorite player No. 16 dominate New Jersey in five games? The world may never know — but that's what I think.

He IS gay! Pull out the pink panties! Oh wait, Avery closes out his thoughts with this:

And if you'd like to learn something, consider this: If you feel like teasing this hockey player about an obsession of his that you might think is a little unusual, go right ahead. Just know that you may get your ass kicked by a very expensive pair of shoes — and that they'll probably match both my belt and my shirt.

Shirt or skirt? This dude is full of suprises. Hey, I'm painting the gay picture of Avery here, but check out Avery's whole article in Men's Vogue to really understand (possibly) the fashion mind of an NHL pest.
It's looks as though he'll pursue a career in fashion after his hockey career is over. Maybe then we'll hear stories surfacing about him coming out of a men's room holding hands with George Michael. OK, OK, I am kidding. (Don't hurt me.)