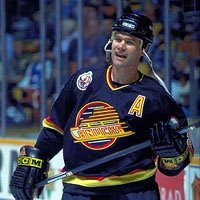 "This is another important announcement for our hockey club," said Mike Gillis. "Ryan’s experiences as a player and motivator will be a great asset to our coaching staff. He has proven himself in the game of hockey and business to be successful at everything he does."

"I believe strongly that Ryan’s skills will complement Rick and I very well," said Vigneault. "His leadership skills and ability to motivate others will benefit our organization. I am excited to have Ryan join our staff."

Hey, wasn't Ryan Walter a defensive specialist back in the day? He did win a Stanley Cup with the Habs in 1986, so he knows what it takes to win.
The New Westminister native currently lives with his family in Langley.
Walter was drafted 2nd overall by the Capitals in the 1978 Entry Draft behind #1 pick Bobby Smith. In 1003 games played over the span of 15 years, Walter played for the Capitals, Canadiens and Canucks. He scored 264 goals and 646 points.

"I'm thrilled to be working with Alain and Rick," Walter said. "They're just awesome people. We're part of a big team trying to create a great atmosphere for players."

Any doubts about Walter's leadership ability? He was a captain for the Habs in the 80's and in recent years, he has been a motivational speaker. He has his own website.

Apparently, one of his sons, Ben Walter, was the Boston Bruins' 5th round choice (160th overall) in the 2004 NHL Entry Draft, according to Wikipedia.

Hey, while we're hiring motivational guys, let's pick up Anthony Robbins while we're at it! UNLEASH THE POWER WITHIN!!!!