Ron Wilson to coach Leafs **UPDATE** To be announced Tuesday

Share All sharing options for: Ron Wilson to coach Leafs **UPDATE** To be announced Tuesday 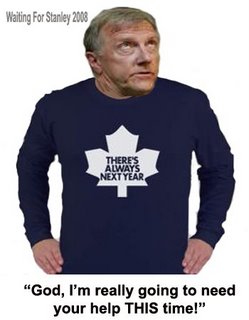 According to TSN, Ron Wilson and the Leafs are close to reaching an agreement that could see Wilson sign a 4-year contract. He is supposed to talk more with Cliff Fletcher tomorrow and an announcement is planned for early next week or sooner.
Judging by how Wilson coached the Leafs and even the Capitals, he does have a defensive-minded approach. But so did Paul Maurice, apparently. That didn't work out very well now, did it? It will be adaunting task for Wilson to get that Leaf bunch on the same page and back into a playoff picture.
As well, Wilson was Vesa Toskala's coach in San Jose whether or not that means anything.
I'm not in agreement or disagreement with this decision by Fletcher. The only knick I have with this is that Wilson, in all his experience, has never gotten a team to the top, to glory. He never could lead the Sharks past a few rounds in the playoffs even though the team was pretty good on paper. His Capitals were swept by the dominant Red Wings in 1998.

Wilson will sign for at least four years, and perhaps five — which is most certainly the time he’ll need to help build the Leafs into a contending team. Wilson understands that he’s likely to garner sub-standard results in his first season or two behind the Toronto bench. It’s in the latter stages of his agreement that he intends to mould a club with better personnel into a winner. That’s why he needed a half-decade of security in his contract with the Leafs.

From CBC.ca: The report is that it's a 4-year $5.6 million deal with incentives tacked on.

Thanks to Temujin for the link to NoCups.com, which is selling all form of T-shirts, like the one Wilson is wearing.