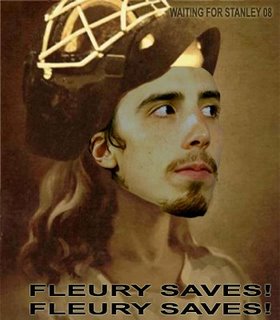 I can't believe the Penguins just won. Outshot 58-32 and looking completely outclassed all night, and Marc-Andre Fleury pulls out a Patrick Roy-like performance from out of his butt. What a game. But especially, what a spectacle by Fleury.
Pittsburgh finally got their bounces tonight, the most crucial one being Hudler's accidental high-sticking penalty in the 3rd overtime to set up the winning goal by Petr Sykora. You just knew that the Wings would burn out on that penalty kill. After all the chances they had in this game to end it, that penalty was a killer, especially after already killing 2 other penalties in the overtimes, both being goalie interference calls.
Speaking of goaltender interference, did these refs all of a sudden get a great delusion of grandeur in regards to that? Why the hell were they calling those types of penalties in an overtime game in the fucking FINALS when they let that go all year? Baffling. Sure, the contact was there, but if you are going to start calling that, institute it at a better time.

It seemed that the Red Wings were tiring more as the OT's went along. Datsyuk looked completely slowed-down. He played 34:20. Osgood looked shakier and shakier as the game trudged on. The Penguins, even though being outplayed completely, still seemed poised and patient, waiting for an opportunity. Well, it came.
A classic game though. It reminded me of the Avalanche-Panthers Game 4 of the 1996 Finals. Mostly one-sided throughout. In that game though, I thought Panthers goalie John Vanbiesbrouck put out a better performance than what we saw from Fleury tonight. That was one for the ages, even though Uwe Krupp ended it in the 3rd OT and the dominating team deservingly won.
Not tonight though. Grand theft larceny.

- Hal Gill played 40:02 and was a -1 on the night. But he looked steady, even in Gonchar's absence. What a long way Hal has come. From the crappy Leafs all the way to the 3rd OT in Game 5 of the Finals this year.

- Anyone else notice how Jarko Ruutu was almost the best Penguin in the overtimes? I can see why. He probably only played 7:00 after 3 periods. He looked to almost click on a line with Malkin and Sykora.

-Malkin=disaster. Turnover after turnover. Gad damn, the guy's a choker! He'll turn it around. The Pens just gave him another chance to do so.

-Sure, some people heap praises on Brad Stuart. Well I don't. He is a schitzoid out there: brilliance followed by utter mindlessness. I think he takes McCabe pills.
I would sit him and play Chelios next game. Just my opinion.