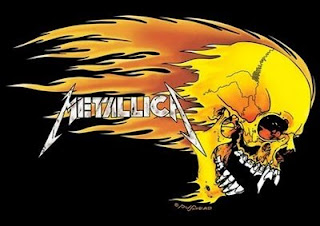 Still have a while to wait before Metallica releases their new album. It's expected out in the fall sometime. While I didn't totally mind St. Anger, most people hated it. The new album will be much better regardless.
I can't wait to hear what they come up with under new producer Rick Rubin. Rubin pulls no punches. Metallica was saying that if something sounds like shit, or a whole song is shit, Rubin will say it bluntly.
Below are a few links to YouTube clips and sounds. I had to sift through all of the bullshit "new Metallica songs". I believe they have only performed 2 new songs live and called them "the New Song" and "The Other New Song". The other ones on YouTube are false.

- James Hetfield talks about the difficulties of making records NOW, considering all of the success they've had in the past with differet styles and sounds.

- Lars Ulrich says that with all of the responsibilities in life (kids) the band is not rushing to put the new album out.

- Kirk Hammett talks about how they've written about 15 songs, but will continue to write more until they hammer down 12 good ones under new producer Rick Rubin.

- A cleaned up version of Death is Not the End, performed live months ago by the band. I love this tune.

- The new album quick preview. It should be released this fall sometime.

- Mission: Metallica. A look inside the studio, as the band fucks with some riffs.

- An extended album preview with audio clips and crazy shit. Ah, the solos by Kirk are back.