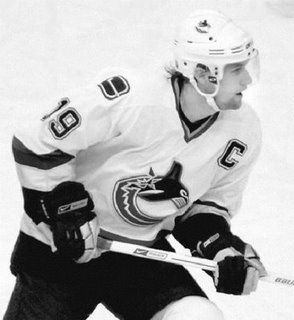 Markus Naslund has remained quiet for quite some time since the regular season ended. Speculation of what he wants to do, where he wants to play has slowly escalated and was jump-started when he sold his Vancouver home last week.
Today, the Vancouver Province has published an article on Naslund's plans and found a Naslund interview with a Swedish newspaper. Here are Naslund's quotes:

"It was not a hard decision (to play another season) to make with a little distance to everything. I feel very motivated to continue playing in NHL."

When asked if he'd return to Sweden to play for Modo Naslund said:

"No. I want to continue playing 'in the NHL' but for which club is far from done."


When asked what he was looking for as far as dollars or where he ends up Naslund said:

"Money is not most important to me, I prioritize the social part, what type of hockey the team plays and which type of players they have. To play for another club in the same division would feel weird. But we will have to wait and see what happens. As I said before, most important is the social part and that they play a type of hockey that fits me."


When asked why he sold his Vancouver home, the answer could only be obvious:

"We sold it since I was unsure of the future. The door to Vancouver is not closed, but it is far from sure that I will end up there."

So there you have it. The rumors of rift between Alain Vigneault and Naslund are mostly true. Naslund did not like Viggy's style. Well, I don't like Naslund's style. At least Vigneault and his staff made Naslund a better 2-way player. But it seems Naslund wants the run-and-gun style. Maybe he should play in Edmonton.
In all seriousness, Naslund is going to quietly walk away from Vancouver it seems, leaving a legacy of both brilliance and scrutiny. Since his miracle seasons from 2001-02 and 2002-03, where he scored a combined 88 goals and 194 points in 163 regular season games, Naslund has been on the decline. Several things attributed to that: Bertuzzi left, Naslund had a hard time consistently gelling with new lines, Viggy's defensive system, and a few injuries here and there. His leadership ability has been in question ever since the decline started. So has his salary.
So, he can pull the "I want to play a better style of hockey" card all he wants to, but hey, last time I checked, the Wings and Penguins were in the Finals and both teams played tight defensively. Suck it up, Nazzy.
How many times did we have to watch Naslund shoot from the same damned spot in the slot over and over again, while there were 2 defenders in his path? How many times did he miss the net? Did you ever just want to punch him in the face during his post game interviews to toughen him up a little? I did.
Bah. I'm tired of talking about him. I'm sure he's a nice guy and all, but it's time for him to go. Let's bring in a guy who has more guts. There, I said it.
I'll save the other Naslund eulogies for post-July 1.