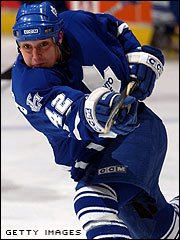 Fletcher's roster-flush continues. Andrew Raycroft has become expendible because he lost his job as the Leafs' starting goaltender to Vesa Toskala last year. Toskala can handle a heavy workload, so there's no point in keeping Raycroft around at $2.2 million per season. He has one year left in his contract.
Will there be any takers for Raycroft? Tampa Bay just shed themselves of yet another goalie by putting Marc Denis on waivers. Maybe Raycroft will fit there. Or maybe Ray Emery will, as he cleared waivers and will be an unrestricted free agent July 1.
Obviously, the Leafs could not hammer out a deal with Kyle Wellwood. He earned $950,000 last year and is up for a raise. Yes, I said a raise. He was not all that stellar last season, playing only 59 games, scoring 8 goals and 21 points and was a -12. Sports hernia surgery kept him out of the lineup for several consecutive weeks.
His play was inconsistent at times, and he only averaged about 12:39 of icetime per game. The previous season, Wellwood has 12 goals and 42 points in 48 games played, averaging 16:38 of icetime per game. That was when he raised eyebrows.
He is a very gifted playmaker. He just needs to stay healthy. If it wasn't sports hernia surgery, the 5 foot-11 180-pounder had previously broken a foot. The health factor is the big issue, but we know he has the skills.
With that being said, I think Vancouver should take this guy. I think Wellwood would thrive with more icetime in a new environment. He is a top 6 forward. I think he could be had at a decent price (around $1.8 million perhaps). Wellwood would be a good replacement for Brendan Morrison.
I think I'm a tad biased as well. I've been a Wellwood fan for a couple of years now.
Think I'm full of it? Check out some these YouTube clips of Wellwood.

-A Wellwood compilation. He can score goals too.

- Ho man! Check out this Wellwood goal when he played for the St. John's Leafs.