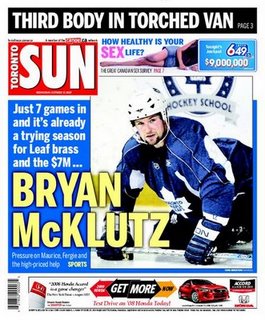 From Mike Zeiberger of the Toronto Sun:

If often-criticized defenceman Bryan McCabe is a potential victim of the imminent Maple Leafs housecleaning as is expected, it likely will not come via the buyout route.
That was the word yesterday from Maple Leafs general manager Cliff Fletcher, who is aware that McCabe's average salary of $5.75 million US translates to a hefty cap hit (almost $3-million per season for six years) in the event the Leafs attempted to buy him out.
The more logical way to go is to trade the veteran defenceman, the belief being that McCabe might waive the no-movement clause in his contract in order to go to a preferable destination such as the New York Islanders. The McCabes spend their off-seasons on Long Island, where Bryan's wife, Roberta, grew up.

If the Leafs can move McCabe, then I'd say that hell has officially frozen over. As much as McCabe can put up points, he is way too much of a defensive liability. Getting rid of him is a must, but may be difficult to do.
For more on King Fletcher and his housecleaning techniques, including news on Tucker, Sundin and Kubina, check out Zeisberger's article.

UPDATE: McCabe will not lift his no-trade clause, according to his agent Ian Pulver. "We continue to hear that the Leafs want to trade Bryan McCabe. Bryan has a no-move clause in his contract that was negotiated with and agreed to by the Leafs. Bryan is not inclined to waive the no-move clause," Pulver told Sportsnet.ca. "He enjoys living and playing in Toronto and the team is a first-class organization. Bryan has logged more minutes than any other Leafs player in the past seven years and given his heart and soul to this franchise. If the Leafs want to move forward without Bryan they should buy out the remaining years on his contract."


So many rumors flying around right now, it's nuts. I'm trying to filter them all out and ignore them. Not many usually come to fruition. How about the Zherdev to San Jose for Marleau rumor? C'mon, who are you kidding? Not gonna happen.