Share All sharing options for: Impaired driving and car crashes abound as Ovechkin is given the key to the city of Washington 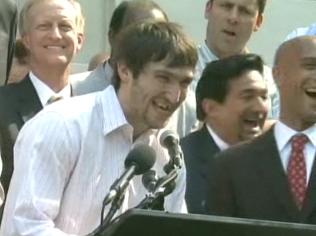 It doesn't happen very often that a professional sports athlete recieves the prestigious key to the Capitol City. It has not happened since 1983. But when Ovechkin won NHL MVP in the form of the Hart and Lester Pearson trophies as well as the Rocket Richard and Art Ross trophies for his uncanny scoroing ability, the honor was his. Oh, and he has brought hockey excitement back to D.C.
Ovechkin didn't dress up like all of the suits around him. He chose the more casual approach: dress shirt, unshaven, and his humor abounded.

"Today is a big day," said Alex Ovechkin, standing on the front steps of city hall. "I have a key for the city. And I'm the president this day in the city, so everybody have fun - and no speed limit."

Rather than anyone frowning at that ruling by the new king of the NHL, it was met with huge laughter.

"I love that his first order of business was to say party all night and no speed limits," Capitals owner Ted Leonsis said.

I would expect nothing less from Leonsis. Great stuff.
Thee clip of the presentation can be found here at TSN.
For complete coverage from a fan, check out this 7:20 YouTube clip.

Who would have thought there would be a day that a Russian would hold the key to an American city? I guess the Cold War is over then.