Hossa really stepped up his game...under typical circumstances.**UPDATE** Hossa may take a pay cut to stay

Share All sharing options for: Hossa really stepped up his game...under typical circumstances.**UPDATE** Hossa may take a pay cut to stay 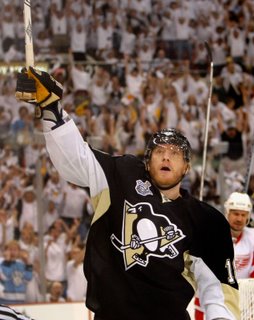 There is so much talk that the Penguins may not retain Marian Hossa's services this summer as free agency season hits. Word is that Hossa is going to want a raise from his current $7 million salary.
More than $7 million?What's this jackass worth? My opinion? NOT THAT MUCH!
For those who would disagree, I will quickly make my point. I would put a lot of money on the fact that Hossa's stats dramatically increased in the playoffs:
1. Because he was playing with Crosby.
2. He was in the final year of his contract.
Yeah, one of those players that overachieves and is super-motivated because free agency season is coming up and a raise in imminent.
Well, Hossa didn't exactly whoop ass in the regular season. He played 72 games, scored 26 goals and only 66 points. He was a -14. Most of that minus came from playing in Atlanta until the trade deadline. So what. That further proves my point. Until the postseason started, Hossa was having a lousy year. He all of a sudden lit it up in the playoffs though, scoring 12 goals and 26 points in 20 games. A monstrous achievment. Hossa silenced his critics about performing in the playoffs. Ottawa fans must be thinking: "where the hell was THIS Hossa when he played for us???"
But you have think that Hossa's agent won't look at this past regular season as a guage for his raise. Nah, he'll use the playoffs and the previous 2 seasons with the Thrashers, where Hossa scored 82 goals and 192 points in 162 games. Impressive.
My dilemna as a GM would be: which Hossa will I be getting? The uninterested slumping Hossa, or the playoff monster of 2008 and regular season guru of 2005-2007?
Are you going to pay a guy more than $7 million to put the puck in the net? What about other attributes? Is he a leader? Is he motivated? Does he make players around him better? To me, it seems like the other way around. Sure, Hossa has wheels and a great shot. But he needs to be surrounded by talent....like Crosby. Like a non-slumping Kovalchuk. If not, his production dips by about 40%.
Am I being fair? Would you sign Hossa for $8 million?
I say, too risky. I'll pass.

In an act of 'unselfishness', Hossa has hinted that he may take a pay cut to stay in Pittsburgh.

"If I wanted to make a couple more dollars, I would probably just re-sign with Atlanta," Hossa said. "There's always a limit, but I'd rather take a little less and play on a good team, definitely."

We'll see what happens with this. Hossa seems to realize where his bread and butter are.