Share All sharing options for: Hockey Night In Canada theme song is finished 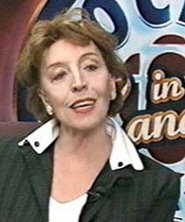 A "saddened" CBC formally announced Friday that it is dropping the popular but disputed theme song to Hockey Night in Canada, ending a 40-year tradition that produced what has been described as the country's "second national anthem."
Despite talks between network executives and composer Dolores Claman's (pictured) Toronto agent that went on past Friday's 5 p.m. (EST) deadline, the CBC issued a statement a few hours later saying the two sides did not resolve disagreements over a 2004 lawsuit and licensing rights to continue airing the famous "Dunt-da dunt-da dunt" trumpet fanfare, which has signalled the start of thousands of hockey broadcasts since 1968.

I wonder how much Dolores was making off that song all these years. Sad that licensing rights have officially destroyed a long-serving classic song that any Canadian can recognize. I never tired of that tune.
So now the hunt is on for a new song. It may come in the form of a contest (confirmed, $100,000 to the person who comes up with it). I was thinking they should go the death metal route. OK, maybe not. But how can any song ever match the original? It won't. We'll just have to get used to it and move on.
I just don't want to hear Nickelback's version of "Saturday Night" anymore. In fact, I don't want to hear another Nickelback song ever again for that matter.

For a detailed history of the song and its composer, check out hockeytheme.com.

And for a completely different angle, David Johnson from Hockey Analysis.com is urging fans to "ditch the song." His reasons are justified.

Nicely put, David. You have to read his whole article though. Follow the above link. You'll probably agree with him. I do now.