Getting to know Canucks' first round pick Cody Hodgson

Share All sharing options for: Getting to know Canucks' first round pick Cody Hodgson 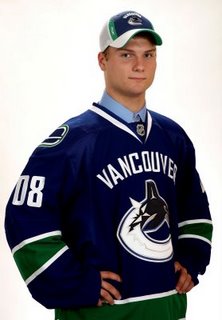 "He's the ultimate team guy in this draft," said Grant McCagg, publisher of the McKeen's Hockey Draft Guide. "Every other junior kid picks him as a leader if you want someone leading your team. He's led every team he's ever played on. He has a consummate pro attitude. His skating is the only thing that's holding him back from being a top seven (pick in the draft)."

"He’s what they call a franchise player," said his Brampton Battalion head coach Stan Butler. "He’s a complete player. He plays good away from the puck. He scores big goals and he’s a good leader on and off the ice. He’s the whole package."

Hodson finished second in team scoring with the Battalions. He played in 68 games, scored 40 goals and 85 points, was a +15, and scored 16 powerplay goals. Apparently he is a great penalty killer as well, hence the Chris Drury comparisons.
A complete package.
This past season was Hodgson's second year with the Battalions. He played for the Markham Waxers of the OPJHL prior to that.

- scouting profile on Hodgson.
- a rifle of a shot from Hodgson, solo effort.