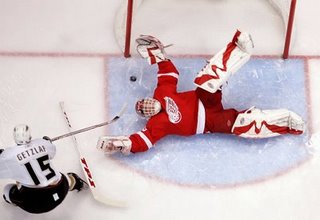 The 43-year-old has hung his goalie gear up for good this time. Hasek's last moments on the NHL ice surface were fitting: parading around with the Stanley Cup. Sure, it was Chris Osgood that overtook Hasek's role in the Detroit net in this year's playoff run, but Hasek's overall, career-long success is staggering to behold.
The tall, skinny, charismatic crease-flopper was drafted late by the Hawks in 1983 in the 10th round and 199th overall. Apparently, he didn't even know he was drafted until several months later. He wouldn't play for the Hawks until the 1990-91 season. Why so late? Because he didn't want to leave his home country of Czechoslovakia. He was Czechoslovakia's goalie of the year throughout the 80's.

When Hasek met with Chicago general manager Bob Pulford in 1987, he turned down the Blackhawks' offer to make him the third highest paid player on the team if he left his native country. The 22-year-old was happy in university and was enjoying the perks that came with being the top goalie in a hockey-mad country. Finally, nearly seven years after he was drafted, Hasek decided to join the Hawks. (source: Legends of Hockey)


But in Chicago, Hasek was playing behind a young dude named Ed Belfour. Now, I don't really remember Hasek playing in Chicago all that much. But I can remember when Hasek really put a stamp on the fact that he could be a starting goaltender. It was in Game 4 of the 1992 Stanley Cup Finals. The loaded Penguins were too much for the Hawks. Belfour let in a really soft goal in the first period and Captain Hook Mike Keenan pulled him immediately and stuck Hasek in net. While Hasek and his mates couldn't stop the Pens in that game, what Hasek did up to the final buzzer was nothing short of stellar. To the roar of the Black-Hawk faithful in the booming-loud Chicago Stadium, Hasek showed the world what he was made of, stopping Mario Lemieux 3 times on clean breakaways, and several other Mario chances. He also slid out to center ice to stop a Kevin Stevens breakaway attempt. "What a play by Hasek! What a play by Hasek!" a jubilant Bob Cole kept repeating. The wizard was flopping around like no one had seen before. Hasek stole the show.
That was the best game I ever saw still to this day. A 6-5 final score. Hawks captain Dirk Graham had a hat trick in that game, but Hasek's heroics were front stage.
Hasek's value wasn't totally recognized by Chicago. He was traded to Buffalo in 1992 for Stephane Beauregard and a 4th round pick in 1993 that turned out to be Eric Daze.
And so he became one of my favorite players of all time. A love/hate relationship. Loved him in Chicago and Buffalo. Hated him in 1999 when he broke our hearts in Nagano. Hated him when he decided to play for Detroit and Ottawa. But through it all, I have to respect the man.
I think it was in October 1999 when I flew to Montreal on my own to hang out in Canada's most beautiful city. I had acquired free center ice tickets from CN through work, which were sent to a friend's house in Montreal. We took in a Sabres-Canadiens 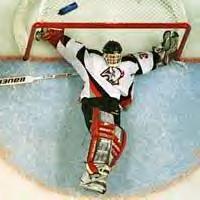 game. I was thrilled to be watching the Habs play and be a part of the atmosphere at the Molson Center. But I was more excited to see not only Doug Gilmour playing for Buffalo, but also Dominik Hasek. Two of my faves in one game. Ironically, Trevor Linden was playing for Montreal at that time, and Linden stole the show. (I wasn't even a big fan of his back then.) the Habs won 5-4 I believe, winning it in the last minute. Didn't matter. I got what I came for.
Hasek's career stats tell a major part of the story here. 735 games played in the NHL, 389 wins, 223 losses, 82 ties, a 2.20 GAA, a .922 save percentage, and 81 freakin' shutous! A comparison? Patrick Roy played 1029 games and had 66 shutouts, a 2.54 GAA and a .910 save percentage.
Hasek, like Roy, could steal games by himself over and over again. He won the Vezina Trophy 6 times between 1993 and 2001. He won the Hart Trophy back-to-back in 1997 and 1998, the only goalie to ever do that. He was an NHL First Team All Star 6 times.
Let's be honest, Hasek was a diver. A master at it. A dent in his armour in my opinion. It made him much-maligned. But his greatness overshadowed the bad, in my opinion.
I'll miss his crazy, fish-flopping style.

- Hasek and the Czechs win hockey gold at Nagano for the first time ever.