Share All sharing options for: Cup Finals somewhat marred by officiating and CBC 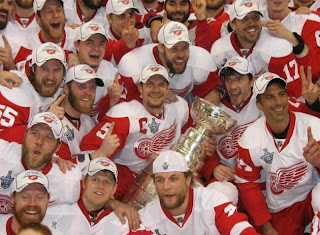 I hate to be a party pooper after a Stanley Cup win by Detroit, but I want to get a couple of monkeys off my back.
1. Are these refs paid to call penalties to sway game results? What the hell was up with the hooking obstruction call on Jiri Hudler with less than 2:00 left in the game? That was weak! The refs were letting a lot go up to that point and then pull that call from out of their asses. Sure enough, Pittsburgh scores on the power play to make it 3-2. You could see the Wings reeling after that. Before that call Detroit was in full control. The shots could have been around 12-1 at that point. It wasn't even close. The Pens and their fans were dead. But a chincey call made at a lousy time in Game 6 just baffles me. What if the Pens actually tied it up? They almost did! I don't know how many obscenities I hurled at the TV there but I lost count. Fucking bullshit is what that was.
Thankfully the right team finally won in the end, and not even the referees could stop it. It didn't have to go this long. Detroit is so good that this could/should have been a sweep. But how lousy were the Penguins 5-on-5 in this series? They were dominated.
Hey I'm not saying Hudler's obstruction wouldn't be a penalty in general. But I saw plenty of obstruction from both teams leading up to that point. So why wait until there is less than 2:00 left in a pivotal game to call it? Ass. This was the worst Finals I have ever seen on refereeing alone. It ruined it for me. Garbage.
The positive? Everything else was just fine. The action was intense. Plenty of huge hits. Great puck movement. Stellar goaltending. I could just do without the diving and lousy inopportune calls.

2. CBC's love affair with Sydney Crosby has gone overboard. Bob Cole loves the kid like he's a love child and Greg Millen's love affair with Sid is almost like something out of a porn flick, but let's settle the fuck down a little bit guys. (Go ahead and flag me)
While Crosby made a few good plays here and there, he was covered masterfully by Lidstrom and Zetterberg. But to praise the guy's holy name every time he touches the puck or makes a pass and treat it like it god-damned genius is absurd. Crosby's pass to Malkin for Pittsburgh's first goal in Game 6 was not legendary, Bob and Greg. It was a cross-ice pass with no Wing in the lane. Any schmuck with a stick could have done that. No, it was a great goal by Malkin and a routine pass by Crosby, end of story. 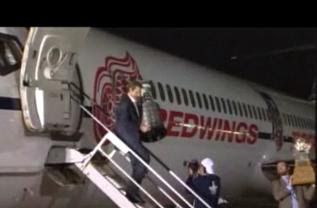 And this was CBC's slant throughout the series. Crosby jerk-off session. Yeah I just said that. Admit it, that's what it was. I'll tell you what a Western Canadian guy in myself thought of this series:
-pure Detroit domination for the majority of it
-great passing and playmaking by Detroit throughout.
-super defensive work by the Wings, give or take a few mistakes and stressful moments here and there.
-Malkin who?
-Crosby who? Can you imagine how Ovechkin would have played in Crosby's stead?
-the series loss couldn't happen to a better team!
-I give huge props to Marc-Andre Fleury though. Sure, he faltered in Game 6, but his save percentage was sickeningly good in a series-losing effort.
-Zetterberg's Conn Smythe win was absolutely deserving.
-I almost entirely agree with Don Cherry's love of Gary Roberts. For a player who spilled his guts on the ice, his 7-8 minutes of icetime per game was an atrocity. He should have taken more of Sykora's icetime. A great ferocious leader he is. So was Ryan Malone.
Oh, and who addressed the CBC media after the loss? Gary Roberts. I guess Crosby and Malkin were too busy crying together in the showers.

As a Canucks fan, and a general Wings hater, I find myself confused right now. Normally I'd post a mockery Datsyuk-Zetterberg Photoshop pic. But I've really grown to like these guys. They are so good! I'm not jumping onto the Red wagon, but I have a lot of respect for how those 2 played. Zetterberg never tired and was a 2-way genius, and I think Datsyuk just may have the best hands and stick work in the NHL. Lidstrom really is worthy of all the awards he wins. I never really appreciated his skills until now. He doesn't have to lay a guy out in the corner. He wisely plays body without killing the guy and keeps taking the puck away. He has that super ability to get his stick in passing lanes too.
Oh well, give me a few months. I'm sure the hate will come back.

LINKS FOR THE CUP WIN

TO CROSBY'S CREDIT, THIS POST GAME INTERVIEW (AFTER THE CRYING STOPPED) WAS DECENT.

YAHOO IMAGE GALLERY OF GAME 6 AND THE CUP CELEBRATION

Last Monday, Tiger Woods was asked which team he was cheering for in the Finals. His response?

Oooo. Hey jackass, it's more fun watching a Jessica Simpson reality TV show than the sport YOU play.
Actually, this year's final 4 games in the Finals had the highest NBC viewer ratings since 2002. That's a positive.