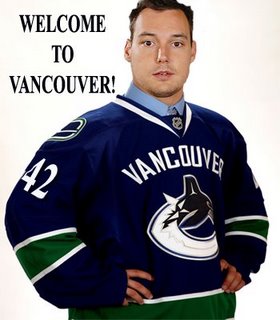 "We're really pleased, we think he's a guy that we are prepared to put a lot of time and effort into and work with," Canucks GM Mike Gillis told The Canadian Press. "We're quite pleased to have acquired him." (Sportsnet)

I was hoping for this acquistion yesterday, and I guess Xmas has come early! This is terrific news, Canucks fans. Remember, Wellwood has battled the injury bug recently, but if he stays healthy, he will make you forget the name Morrison.
Great acquisition by Gillis.
Now he just has to sign Wellwood before July 1, which I'm sure are his intentions. What do you think he's worth? I'd say, given Wellwood's injury woes lately, it could be a short-term deal at $1.8 million per season. Anyone else wanna guess? Whoever guesses the right dollars on the first year of his contract gets $50.