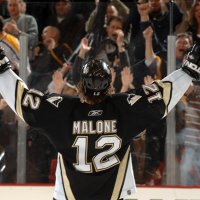 Hey, it's no doubt that Mike Gillis is going to make a huge splash this offseason. Just how many players he will obtain seems to be the question. He has about as much money to spend on players on Britney Spears does on psychotherapy.
The Pittsburgh Tribune has just made a bold statement:

Marian Hossa will have several clubs pursuing his services July 1, and Vancouver is considered a fast-charging contender as the Canucks look to make a splash in the offseason.
The Canucks also plan to chase left wing Ryan Malone, who said last week he will exercise his unrestricted option.
Vancouver likely cannot offer Hossa $8 million annually over five years - the deal he is believed to be seeking - but would bid high for Malone, possibly more than $5 million annually on a long-term contract.

First of all, how do they know how much we can or cannot spend? We're rich in cap space right now.
Secondly, I really don't want to see Hossa in a Canucks jersey. Malone, yes, depending on money. But Hossa? No way. I'd rather eat a rotten sardine sandwich.
There are several rumors/desires for the Canucks to bring back Alex Auld, as he is officially being squeezed out of the goaltending picture in Boston thanks to Fernandez and Thomas. I see Alanah at Canucks and Beyond did a poll about this recently and 60% of her readers voted "yes", 36% voted "no", and 5% (including myself) voted "other". The conditions of the poll question were "if both Auld and Sanford 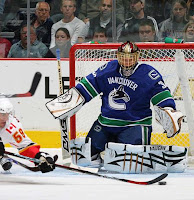 asked for about the same money they made last season, which is around $600,000.
I don't want Auld back. What kind of dollars is Auld going to be asking for? A raise is coming to him, after performing fairly well in 23 games with the Bruins last season. So if he commands even over $1 million, he should be out of the question, because he's only going to be a bench warmer behind Luongo anyway.
I would like to see especially Cory Schneider or Drew MacIntyrewarm that bench and get some experience. They are 22 and 25 years old respectively. I know Schneider did very well with the Moose last year, so I would expect him to make the club this fall.