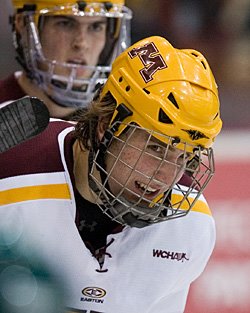 From the Boston Globe Bruins Blog via Spector's:

Blake Wheeler, the highly-sought winger from the University of Minnesota Golden Gophers, has advised his agent to finalize terms of a contract with the Bruins, a two-year deal that won’t be made official until July 1, in keeping with NHL bylaws that govern the movement and signing of unrestricted free agents.

Apparently about 20 teams where chasing this guy. I have not been paying much attention to this story. So who the heck is Blake Wheeler?
- the Plymouth, Minnesota native was drafted 5th overall by the Coyotes in 2004 behind Ovechkin, Malkin, Cam Barker and Andrew Ladd. This made him the highest drafted player out of high school in 21 years. Wheeler and the Coyotes never agreed to a contract and he decided to become an unrestricted free agent this summer.
- he's a big dude. 6 feet 4 inches and 219 pounds.
- played the last 3 years for the University of Minnesota, yet the right winger's stats are nothing stupendous.
- Hockey's Future lists his pro's and cons:

Wheeler is a good skater, has deceptive speed, and has great acceleration when needed, but needs to increase his stamina. He can stickhandle at top speed, but needs to develop more moves, especially power driven moves coming out of the corner. He needs to be a bit more creative on the forecheck, using his body and keeping his legs constantly moving. When he shows spurts of confidence driven play, he can be very effective on forecheck, most notably down low. He needs to continue to improve on creating space and or distance while he’s on the puck. He has the ability to play on special teams.


I'm not seeing what all the hype is about. Maybe YouTube can help me out.

- this sweet, diving goal by Wheeler was the winning goal for a championship for Minnesota.

- a Wheeler report on FSN.

So he can score some pretty goals. I guess he has the upside, but needs to realize it.