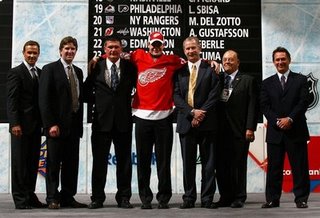 7:55- Alright, that's enough for me. I hope this live coverage has been helpful to you. I will update if there are any significant deals and for sure update the rest of the Canucks' picks. So long for now.

7:52- The Red Wings select....oh...Stevie Y gets a great ovation.....Thomas McCollum. Makes sense. The Wings' goalies are getting old.

7:35- The Flyers trade 27th pick to the Capitals for Steve Eminger and pick #84. Eminger showed a lot of potential for the Caps 2 seasons ago but then fell out of favor.

6:55- The Capitals select Anton Gustafsson, son of former Cap defenceman Bengt. Strange choice. Keep it in the family I guess. Anton is a center like his father was.

6:27- Anaheim picks this high because of the Oilers signing Dustin Penner. The Ducks select Jake Gardiner.

6:13- Chris Kelly's contract has been extended for 4 years at $2.1 million per season. Alfredsson will make the pick for Ottawa. Chants of Alfie ring through the arena! The Senators pick Erik Karlsson. A Swede picks a Swede.

6:13- Chris Kelly's contract has been extended for 4 years at $2.1 million per season. Alfredsson will make the pick for Ottawa. Chants of Alfie ring through the arena! The Senators pick Erik Karlsson. A Swede picks a Swede.

5:58- Gillis was asked if he would move Kevin Bieksa and he said that if a deal made sense he would do it. Huh. After Bieksa's struggles last season I wouldn't mind. Talk was that Gillis was talking with Carolina, maybe exchanging Bieksa for a forward. 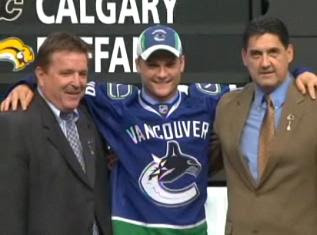 5:37- A sense of sadness now, as TSN flashes back to Nonis picking Luc Bourdon in the 1st round a few years back. Steve Tambellini lets the Bourdon family know that they are thinking about them. The Canucks select Cody Hodgson. Hodgson has great leadership qualities but doesn't have enough speed yet.
Gillis makes it clear to James Duthie that he has not made the Sedins available. There you have it. So stop the rumors.

5:26- Wayne Gretzky gets a great ovation and chant from the Ottawa crowd and the Coyotes select Mikkel Boedker.

5:12- Blue Jackets select Nikita Filatov, despite all of the problems they've had with Zherdev. The TSN panel thinks Filatov WANTS to play here.

4:58- Leafs trade their #7 pick and a 2nd or 3rd pick (conditional-can't quite explain it!) to the Islanders for the Isles 5th pick.

4:43- Bettman announces: Montreal trades their #25 pick and a 2nd pick 2009 in exchange for Alex Tanguay and 5th round pick in 2008. Tanguay goes back to his home province where he'll probably flourish. He just didn't fit in quite well in Calgary and was too expensive.

4:33- Bettman announces the Jokinen trade. You can hear the "ooo's" in the crowd. 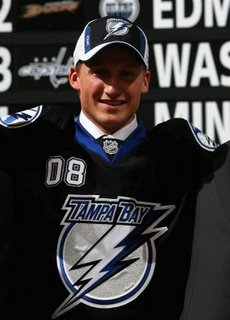 4:18- Florida traded Olli Jokinen to the Coyotes for Keith Ballard, Nick Boynton and the 49th pick. Holy shite! The Panthers really beefed up their D. Imagine Doan and Jokinen coming at you huh? More depth at center for Phoenix.

4:04- Before the Lightning take their pick, a 3-way trade happens. The Flames get Mike Cammalleri, the Kings get the #?? pick get Anaheim gets #17 and #28 overall.The Flames are already planning on moving Alex Tanguay to Montreal. 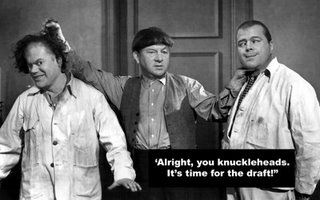 
2:50 pm- THE EK FACTOR- I get the feeling that Eklund and his legions of underaged fans are the biggest culprits behind these bullshit rumors that keep swirling around. Just reently from Eklund:

Spezza. "VERY LIKELY TO BE MOVED" I am told.

Meanwhile, back in April after a disappointing Sens playoff series loss, Bryan Murray gave Heatley and Spezza a vote of confidence.

Murray also said he was not about to trade Jason Spezza or Dany Heatley, saying the team made a commitment to those players being part of the team's core group. He acknowledged that both had poor playoffs and were spoken to about it on Thursday, but added, "I'm not going to discard players like these two people."

A little contradicting isn't it? I think Eklund needs to fire his sources. 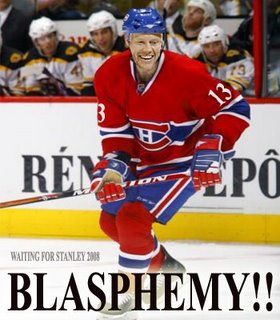 12:45: CANADIENS TALKING WITH MATS SUNDIN- The Leafs have given the Canadiens permission to speak with Mats Sundin and apprently the 2 sides have already been talking. This is nothing to freak out about, but I can't help myself. Sundin in a Habs jersey would be torture to my eyes. It would crush my spirit, or whatever was left of it.
Of course, Sundin hasn't decided whether or not he is going to play next season, but apparently the Leafs want an answer by July 1. As TSN's Darren Dreger put it:

The Leafs would have to trade Sundin's negotiating rights to the Canadiens to facilitate an early signing.

What would Montreal be willing to give up for Mats? I'll bet the Leafs would be asking for too much. End of story.

11:10 AM- WILL THE SEDINS BE DEALT?- Which potential free agents this year or next aren't going to be dealt on Draft Day or pre-July 1? God, the media just has a fucking smorgy over this rumor crap don't they? The Sedin rumors are no different, yet they have a twist. Commenter Kevinv from Deep In The Blue mentioned this article from the Globe and Mail where Mike Gillis is quoted as saying:

"People have called me about them," Gillis said. "We are not actively trying to trade the Sedins in any form. A lot of teams have been calling, but we're hoping to sign them long term and keep them in Vancouver."

The article then goes on to remind readers of what Gillis' assessment of the Sedins was when he took over the helm:

"I think they are front-line players, but I don't know if they are players the team

will be built around."

So there's the twist. What kind of season are the twins going to have in 2008-09? How much higher will their value go up? I agree with Gillis that you can't build a team around them (or, a great team), so if they ask for serious dough for a long-term deal, then you have to make a serious decision. That will also depend on how they are performing.
To me, the Sedin scenario is just another of many scenarios that the media and pundits overly think about and create rumors out of. I would put serious money on the fact that the Sedins will not be traded any time soon. Gillis has his head wrapped around the draft right now. In July he will find talent to compliment and surround the Sedins with to take the pressure off them.
When the time comes where Gillis starts negotiating with the inseparable twins, then we'll see. But that could be months down the road yet. So no, I'm not buying into this Sedin-trade hype. The Sedins are not going anywhere anytime soon. There. That's my damned rumor.

9:45AM- GOALIES PUT ON WAIVERS- The Senators have placed troublesome egomaniac Ray Emery on waivers and the Kings have placed the mighty fivehole Dan Cloutier on waivers as well. I think Emery will be picked up. By whom though? I'd guess Chicago or Tampa perhaps. 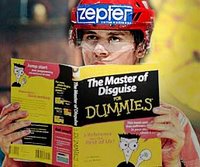 9:30AM- WHERE'S MALKIN PART 2-There are Russian teams that are eyeing Evgeni Malkin after his contract expires next year. Word from the Toronto Star (keep in mind...a tabloid) that certain teams might offer Malkin up to $12.5 million US per season tax free.

"Hey, we can afford to pay more than the NHL right now," a high-ranking executive with the Russian league told the Star this morning. "Our economy is commodities-based so we're not going through the same problems that you have in America."

Brrr....a hockey Cold War is brewing.
This rich Russian league is known as the Continental Hockey League. They are already probing NHL players and trying to suck them away for bigger dollars.
Sure, this sucks. But we have been stealing Russian stars for a couple decades now. It was just a matter of time before the tables turned. This is going to be a major battle in the near future no doubt.
UPDATE: From the Globe and Mail: This is what Malkin's agent JP Barry said today:

"He's been focused, since Day 1, on doing an extension with the Penguins," said Barry. "We've had discussions with them, since the end of the playoffs, on a framework and expect to have something done with the team early in July."

Fair enough....maybe. This doesn't make the potential problem go away. If a Russian squad is talking with Malkin 'under the radar' there's no guarantee that Malkin wouldn't be enticed to go back to his homeland for more money. Wouldn't you? Until Malkin signs a long-term deal with the Penguins, there are no guarantees. People will lie about players' intentions. Don't believe everything you read.

8:25- I really like Mike Gillis' move of promoting Stan Smyl to Director of Collegiate Scouting. We need more and better scouts. Check out Canucks.com's Top 10 Canucks Draft Day steals. Beyond Bure, Sundstrom and Larionov there isn't much to brag about. Oh, and the above 3 were Europeans, who most teams wouldn't touch with a 10-foot pole because you didn't know if the guy could even come to North America. At least those players DID come over though. Getting Bure in the 6th round though...... wow. And the payoff for that...

8:00 AM- Yeah, I dumped the Cover It Live widget. So much potential with it, yet I kept having connection problems.

7:50AM- St. Louis Blues have acquired goaltender Chris Mason from the Nashville Predators in exchange for a 4th round draft choice, 111th overall, in the 2008 Entry Draft. Poor Manny Legace. Just can't stay a #1 goalie.
Dan Ellis however was signed by the Preds today. He is their go-to guy.

12:15AM Huh. The Leafs have acquired the rights to Jamal Mayers from the Blues in exchange for a 3rd round pick in today's draft. I thought they were rebuilding through drafting......

8:14 PM- It looks as though the Flyers have signed Jeff Carter to a 3-year deal to the tune of around $15 million. Haha. One less rumor going around.

8:09- So, Brian Burke is probably taking in his student and making Dave Nonis a senior advisor for Draft Day.

8:06- TSN's top 60 prospects can be found here. I gotta educate myself before tomorrow's draft!

7:47- "You guys make up more stuff than I can ever imagine," Ottawa general manager Bryan Murray told reporters on Thursday. "I heard a rumour last night that Pittsburgh was moving one of their star players. I talked to their manager today to see if I could be included in the discussions and they kind of laughed at me."

Some rumors are just pathetic, like the Sens possibly moving Spezza and the Penguins maybe trading Malkin to save cap space to keep Marian Hossa. Give me a fucking break! That is the dumbest stuff I've heard. I guess it's pretty easy to pick on Malkin and consider him expendible after he struggled in the Cup Finals. But that still is not grounds to make up suck false rumors like this. My guess is that people are going to be disappointed after draft day because not as many deals were made as speculated. Isn't that how it always is? It sure as hell was like that last year.

7:41 pm- The Lightning are close to signing Vinnie Lecavalier to a "life-long" deal, according to TSN.