Share All sharing options for: Zettersyuk: The Euro player stereotypes are dying 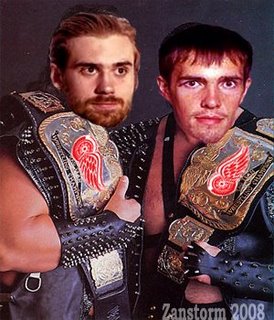 There was a time when Demolition ruled the World Wrestling Entertainment Tag Team Division and it was cool to watch. Right now, Henrik Zetterberg and Pavel Datsyuk are an unstoppable combo in the NHL playoffs. These 2 are sickeningly good. You can hit them and rough them up but they continue to thrive and excel. They create so much open space with their flexibility in their plays and even when they are being tightly checked they push through. This is killing the old Don Cherry (and my own) stereotype that if you bang around skilled European players that they'll shy away from the puck when an opposing player charges them. Such is the evolution (generally speaking) of European players adapting to North American-style hockey.
You can't write off a team with a lot of European players on it to make the Finals anymore. Not this year anyway. And already, the "template" for building a successful NHL team full of bigger and faster Canadian players (like the Ducks of last year) has faded.
Adaptation.
More obstruction calls helps. It lets the smaller skilled guys play their style.
If Johan Franzen was in the Wings' lineup there would be (not including goalies):
-6 Swedes
-6 Canadians
-3 Americans
-1 Russian
-1 Czech
-1 Fin

9 Europeans! And a Swedish captain to boot. Is this the year that Lidstrom squashes the whole "a European captain has never won a Cup" statement?

5 Europeans! A Canadian captain! I guess the Penguins are heavily favored to win the Cup then, right? Don't bank on it.

I guess I'm counting on the Flyers NOT coming back in their series against Pittsburgh. But just for the hell of it, the Flyers' nationality counts as follows:
-11 Canadians
-3 Americans
-2 Fins
-2 Czechs

Wow. Look at all those Canucks on the Flyers. And only 4 Europeans! A Canadian captain! Shit, these guys should be in the Finals already!

It just goes to show that my stereotypical attitude was wrong. Sure, I love it when Canadians succeed in hordes, but this year is kind of stretching my attitude and perspective.
Europeans are generally getting stronger and keeping pace with our style of hockey nowadays and I need to get my hockey-superiority head out of my ass. It's just hard to sometimes when you cheer for a team that has/had 3 gutless Swedes on it (Naslund and the Twins). There are great European players out there outside of my little box.

-The top 3 scorers in the playoffs are European (Zetterberg, Datsyuk and Malkin.)

-The Top 2 goal-scorers in the playoffs are European (Franzen and Zetterberg). That includes 6 out of the Top 10.