Wings vs Pens: A dive-to-dive basis

Share All sharing options for: Wings vs Pens: A dive-to-dive basis 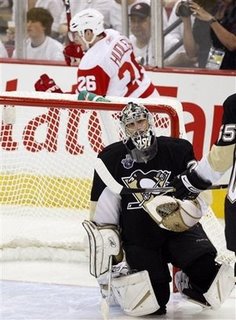 You won't get a Zandberg silence on diving in the NHL. Especially not in the Cup finals. Tonight's game could have been decided that way. The only thing that was lacking in Crosby's dive with 10:00 left in the 3rd period was the splashing of water in the pool. Luckily the Wings masterfully killed off the 2-man disadvantage. These teams take turns diving night-to-night. Pathetic.
Aside from that, it was a decent game. The right team won. The aging Wings continue to show composure in all areas, but especially in their own zone. It almost seems effort-less sometimes.
They also continue to outshoot the Pens. Tonight it was 30-23, including 9-6 in the 3rd period.
Peeves?
-Gary Roberts only played 10:47? He needs more time than that. Roberts the warrior deserves more.
-I know trainers teach players to beat 4 guys in Russia, but that doesn't work on this continent. Malkin needs to learn that. His play is like a broken record. He rips up the ice and tries to beat a line of Wings and is not being a team player that way. He's just causing a turnover. There's no use being selfish when in a slump. Malkin is going to learn that the hard way.

It looks like the Wings are going to take it at home, barring some stupid calls by the refs to sway the game. Should be a beauty game. No, really.

PS: I never knew that Zetterberg was that good of a 2-way player. He saved the Wings' butts more than once tonight with his defensive play. Unreal.

A nice touch by Don Cherry on Coach's Corner tonight. His comments and tribute to Luc Bourdon were heartfelt and appreciated.

A show of class by the NHL and Pittsburgh to give Luc a moment of silence tonight as well. That can be seen below.