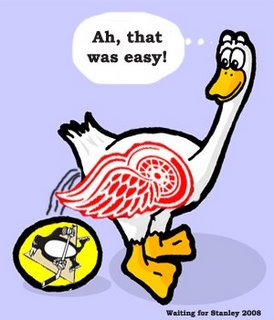 So the sign being held by a Wings fan at last night's game read. I laughed. I also laughed at how one-sided Game 2 (and this series) is. Talk about ownership. It's men versus boys out there. The talk of the younger Penguins outhustling the elderly Wings has all but ended for now. The Wings are playing their system to a T.
The negative? It's almost emotionless out there. Sure the hits are present, but the Wings skate away from any frustrated Penguins rough stuff. It took a Sykora clip on Osgood near the end of the game to finally get the Wings off their discipline game. (Was that Datsyuk punching Roberts with his gloves on?) Once again, that was an Osgood embellishment, as he flopped onto the back of the net. He did it earlier with Malone as well, resulting in a Pens penalty. Yeah, the only emotion out there is hits and dives. Sad isn't it? So much for the grand series.
But it's not over yet. Osgood and Franzen's dives may prove to be a motivating factor for the Penguins, who look like deer in headlights out there. Maybe now the anger is there. Take that anger into Pittsburgh and you never know. Only thing is, I don't see Detroit getting off their game on the road either. No matter. I think that all the Pens have to do is start skating harder with a vengeance and SCORE THE FIRST GOAL. Once they can do that, they'll finally have some momentum to build on.
What did you think of the play of Gary Roberts? For about 9.5 minutes of icetime he played like a warrior out there. Sure, it was dirty and he was penalized on occasion, but does that really matter? Something had to spark the Pens. Lord knows Crosby and Malkin weren't.

Michel Therrien after Game 2 in regards to the Osgood incidents:

"We took two penalties tonight on the goalie. We never take penalty to the goalie in the playoff. I'll tell you something, I reviewed those plays. He's a good actor. He goes to players, and he's diving. Took away our power play. Got to get focused. I know our players are frustrated right now. It's tough to play the game. But Osgood did the same thing against Dallas under Ribeiro."

Touche. Way to bring up the Ribeiro incident. More of that interview here.

"Well, I guess the way our team's built is we don't have as many North America guys that would be dropping their gloves and fighting right there. The way we try to do it is we try to play as hard as we can between the whistles, and we try to shoot the puck in the net when you take penalties. And to me, we just try to keep our poise and play. And the stuff after the whistle and all that, that's not going to win us any games. Between the whistles is. And we're just going to try to continue to play the way our team's built to play."

Q. Tomas, is your strategy against Sid's line to more or less take away his options?

Goals after the first 2 games: Wings: 7 Penguins 0
Shots after the 2 games: Wings 70 Penguins 41
Powerplays after 2 games: Wings 14 Penguins 8
Points by Euro players after 2 games: 10. 10 points out of 14 total, or, 71%
Academy Award performances by Osgood in game 2: 2. Best Diver in a lead role.
Cheap shot punches by Gary Roberts in Game 2: At least 10.
Seconds it took Franzen to fall to the ice after Roberts punched him: About 3. Diving jackass.
Times Crosby was reduced to tears after 2 games: Twice, not including the call to his grandma between the 2nd and 3rd period last night and on the ride home.

The Penguins look dead and confused. But 3 big things they have to do now in Game 3 are: skate harder and with a vengeance, make crisper passes, and SCORE THE FIRST GOAL.