Share All sharing options for: Vigneault gets contract extended 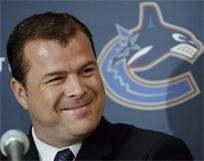 The Canucks have extended Alain Vigneault's contract to the end of the 2009-10 season.

''This is a significant announcement for our hockey club,'' said Canucks' GM Mike Gillis. ''My first priority when taking over the job was to meet with Alain and ensure we shared the same philosophy about building an elite level team for now and for the future. Alain has done a very good job in his two years in Vancouver and I am confident that will continue.''


Vigneault had this to say:

''I am pleased to be signing this extension to remain the Head Coach of such a great franchise. Mike and I have had meaningful discussions about how we believe we can take the next step with this team to be as successful as we all hope to be. This is a team that I believe in and a city that I love living and working in.''

So there you have it. Anyone with a brain in their head could figure out that Vigneault was probably not going to be fired. But there are a lot of fans who WANTED it. To those people I say: "You're stuck with him now." And that is a good thing. I am a big fan of the job that Viggy is doing here, regardless of what happened this past season. Watch what he does with a revamped, souped-up team.
In case you haven't been watching the playoffs....look at the 2 teams in the Finals. They can score goals AND play defence. That is what wins now: patient teams with scoring abilities. A team NOT in that category as an example: Toronto.
Any fan that cries about the hockey being boring in Vancouver needs to take a step back and look at what is going on around the NHL. That being said, Gillis made it clear in his interview that the style of coaching will depend on who he brings in this summer.
The extension of Vigneault's contract raises a minor question in my mind. What about all the Naslund rumors stating that he wouldn't play in Vancouver if Vigneault was behind the bench? If that was a false rumor, then fine. If it was true, then I am one happy man!