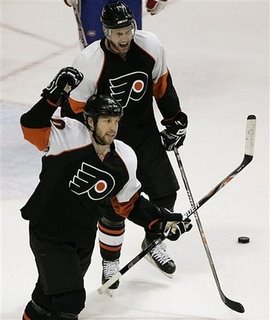 I don't know about you, but every time I see R.J. Umberger score goals for the Flyers in these playoffs, which is now 7 times in 11 games, I wonder to myself: "Hey, the Canucks drafted this guy didn't they? Why did they give him up?"
Here is/was the scoop on the man with the funny last name.

- first of all, what the hell does RJ stand for? The answer is Richard Junior. His full name is Richard Allen Umberger Jr.
- drafted in the first round, out of Ohio State 16th overall by the Canucks in 2001. Just for poops and giggles, the Sabres drafted Derek Roy and Jason Pomminville in the 2nd round that year, 32nd and 55th overall respectively.
- the Pittsburgh-born center never played a game for the Canucks. In fact, he ran into contract problems with then-Canucks GM Brian Burke. Burke played hard ball with Umberger, and wouldn't even offer him the same money that he offered to Ryan Kesler, reports said. Alas, in 2004, Burke shipped RJ off to the Rangers in exchange for Martin Rucinsky.
- Umberger never played a game for the Rangers either. They refused to sign him, and received a compensatory 2nd round pick from the Canucks. Umberger was free to sign where he pleased, and chose Philadelphia in 2005.

Hindsight is always 20/20. But it sure would be great to have Umberger at center in Vancouver. But he has definitely ended up in a good spot on a good team. The guy is clutch right now.