Ribeiro's slash on Osgood not suspension-worthy / UPDATE: No suspensions, just fines all around

Share All sharing options for: Ribeiro's slash on Osgood not suspension-worthy / UPDATE: No suspensions, just fines all around 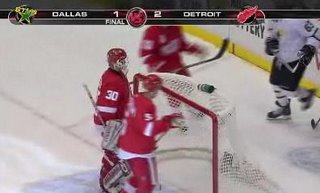 Damned Red Wings! They make it look so easy out there don't they? But that is what a team that is completely on the same page does, as Kris Draper had alluded to after the Wings' 2-1 victory Saturday.
The Stars look either out of gas, outclassed, or both. They just can't sustain any pressure or even get any pucks to the net. The Stars could use a shot of adrenaline, and maybe returning home for Game 3 might do that. For now, the curse of Dallas winning in Detroit still lives.
Besides all of that, what happened post game was a piss off for me, for several reasons.
1. Mike Ribeiro turned around and slashed Chris Osgood after the final horn sounded. Why did he do that? No, it was not because Osgood was chirping at him. It was because Ozzie sneakingly raised his stick hand as Ribeiro skated past him and caught him in the face with the butt end of his stick. It was intentional. Ribeiro, obviously angered by that dirty play and the loss, turned around and whacked Osgood over the chest with his stick.
2. Oh yeah, then the CBC panel gets all over Ribeiro because it looked so bad. Not one of them even noticed that Osgood butt-ended Ribeiro! Fools! Did any of the American commentators catch on to that? Because our guys didn't.
3. Osgood falls over like he's been shot to sell the slash. If any of you have ever worn goalie equipment, you will understand that getting slashed in the chest doesn't hurt. A guy could stand there and do that to you all day. But Osgood lay on the ice like the classless fucking idiot that he is!
And to top that off, the Detroit netminder is interviewed post game and says that the slash caught him in the ribs and that basically the League needs to look at it!

"Even if I did butt-end him, it was an accident," Osgood said. "I was trying to protect our best player, Nick Lidstrom, so he didn’t get run."


Fuck off! Be a man and own up to the stick job you put on Ribeiro! Gutless puke. (For the record, Lidstrom wasn't behind the net when the horn sounded, he was in front of Osgood.)
Even this ESPN footage doesn't capture the Osgood butt-end properly. Everyone only sees the slash. And the jackass media cries fowl and wonders if a suspension will come. I know that the NHL will see the whole incident, and probably let Ribeiro off easy. They should. If Ribeiro gets any 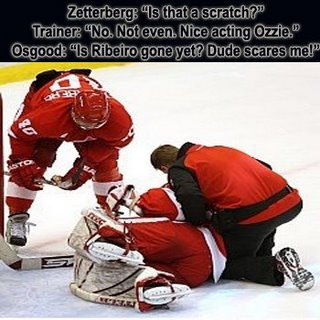 punishment, Osgood should as well. (Here's a good clip of the whole incident from ESPN. Thanks Tapeleg for the link.)
4. The strange thing that angers me is that I'm defending Mike the Spineless Star Weasel Ribeiro. What has it come to? There are not enough teams in the top 4 that I like!
5. Hockey is turning into soccer. Bunch of diving assholes out there. Hail to those who don't dive and play like men with honor. The rest of them need to check if they have any balls attached to them.

Yeah, I'm pissed off. The sport that I love is turning into a god damned joke.
So no, Ribeiro should not be suspended. More like Osgood needs some lessons in class. I would have slashed the jackass too.
But at least there is more emotion in this series now.

UPDATE FROM TSN: Osgood, Ribeiro and Ott will all be fined but not suspended. Nice! I agree with the NHL on this call.