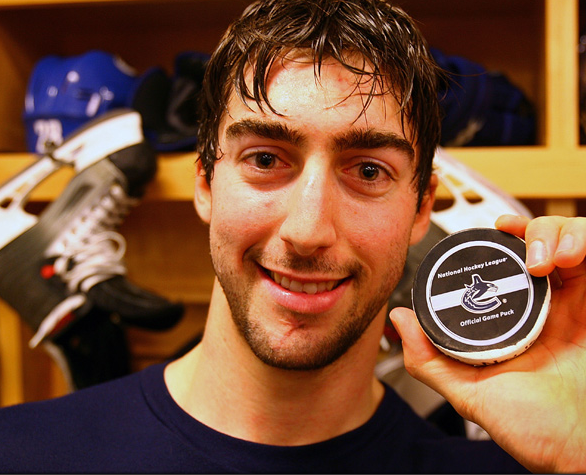 At a time when most hockey fans are enjoying some of the best walking the planet duke it out we have to deal with tragedy. Sadly, every once and awhile real life smacks us all upside the head and makes us take pause; the news that Luc Bourdon died in an accident in northern New Brunswick - just days after buying the motorcycle - is regrettably one of those times.

We saw something eerily similar with Roethlisberger a few years ago and, five years ago, young Dan Snyder was lost in an accident. Just like with those events, no one saw this coming for Bourdon.

At 21, Bourdon's NHL career was just beginning. His juniors stats helped propel him to be ranked 6th best in 2005 (and taken by the Vancouver Canucks in the 1st round, 10th overall). Bourdon was a solid two-way defenseman who was drafted, in part, to help anchor the Vancouver blueline for years. Winning two golds in the World Junior Hockey Championships, he had the size and strength to shut guys down and the offensive upside and strong skating to make him dangerous on the rush and on the powerplay. His best season was in 2004-05 on the QMJHL's Val-d'Or Foreurs where he was sixth on the team in points (13G, 19A). He played 52 games (including 11 post season games) with the Manitoba Moose while shuffling time between them and the Canucks. The rampant injuries on the Canuck blueline last year afforded Bourdon 27 games with the big club where he scored two goals and nothced 20 PIMs. It was debatable whether the Canucks were going to give him the time to grow or move him for help right now; regardless, this much was clear: a Canuck or not, Bourdon was going to be a great NHL player.

In the next few days, more pucks will be dropped, more scrums will be fought, more goals will be scored and eventually a Cup will be won, beer will be consumed, the draft will move the next crop of superstars, trades will occur, 30 training camps will begin, another season will start and endless stories on every player will begin anew. But as we watch Crosby lead his team right now, one can't help but think of Bourdon, selected a mere nine spots behind him three years ago, is now gone.

Shippagan lost their only NHL-caliber son, the Vancouver Canucks lost a big part of their future and the NHL lost one of their budding talents. Most importantly, the Bourdons lost their son way, way too soon.

Canucks & Beyond
Waiting For Stanley
Canuck Nation
Hockey Rants
Orland Kurtenblog
Tom Benjamin
GZ Expat
James Mirtle - (He has another post up now plus he tracked down a Facebook group.)
Joe Pelletier