Red Wings don't want to change their lineup. The Penguins do.

Share All sharing options for: Red Wings don't want to change their lineup. The Penguins do. 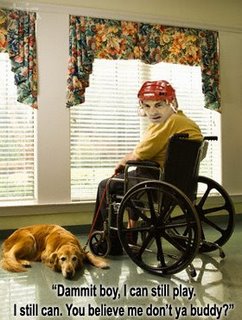 "All we're doing today is, we won the last game and we're not changing (the lineup)," Mike Babcock said. "The bottom line with Cheli (Chelios) is, we have a lot of respect for his ability and what he brings to this team. But this isn't about Cheli, it's not about me, it's about the Detroit Red Wings and winning."

That speaks volumes of the play of Chelios' replacement Andreas Lilja. So is this going to apply to Johan Franzen as well? Franzen has declared himself ready to play on Monday. But wouldn't that be tampering with team chemistry? He does have "only" 12 playoff goals, but the same rule could apply.
It looks as though Gary Roberts will draw into the Penguins lineup Monday. Michel Therrien had the same mentality about team chemistry as well and did not use Roberts in Saturday's game, annoying Roberts I'm sure. But with the crushing 4-0 loss, I'm sure Therrien has no problem dressing the veteran now. Given his level of boneheadedness, Jarko Ruutu should sit out Game 2, in my opinion. He was terrible in every way on Saturday.
Amazing how well butterfly goalies like Marc-Andre Fleury can stop all the low shots with such ease. But if you aren't a large goalie, the top corners will be open most of the time. The Wings really exposed that weakness in Game 1, and I'm sure will continue to do so in the series.

"Me and my buddy were kneeling down and all of a sudden Fluery comes running out," Thieda said. "His pad catches the corner of the boards and he just eats it.
I've never seen something that funny in my life. I've gotten 25 phone calls already. I've never been that close to something like that, it's awesome."

Those were the words of Alec Thieda, who was one of the ice crew guys who had a bird's-eye view of Fleury's folly.