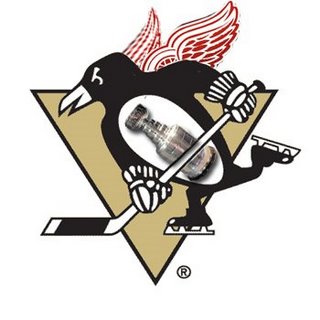 It is a very tough call predicting which team is going to take Lord Stanley this year. On one side, you have a more experienced team in the Wings who have shown so much composure throughout the regular season and playoffs. On the other side you have a younger team that is showing composure beyond its years.

I am going to break this down into several statistics from this year's playoffs so far in order to make a decision, because I haven't picked a winner yet.

Both goalies are going to see a lot of shots in this series.

So geez, most of these stats are pretty close.
Can the Wings contain the Penguins' speed? Probably. Can they shut down Crosby and Malkin? I think so. They have proven to be disciplined in the playoffs so far, even against fast teams. They have a rigid defensive system and a wicked pressure game that forces turnovers and then their puck possession is so accurate. Then again, so do the Penguins.
Even though the Penguins are deeper at center, like Darren Pang said today, I don't think that's enough.

Who would you rather have in goal, Fleury or Osgood? Tough call. I see that most polls on the matter are about split 50/50. I'd go with Osgood, because he has the experience factor. But I'm not underestimating the potential ability of Fleury in the Finals either.

The fact that Detroit has more secondary scoring so far didn't suprise me. Pittsburgh has Laracque and Ruutu as grinders and they score about as much as Ugly Betty.

I guess that hardly settles it. With the Wings having home ice advantage and the extra experience, I'll go with them in 7 games.
This series should be great.

Anyone else care to wager?

-Johan Franzen has been cleared to practice with the Wings today. We'll see if he plays tomorrow. Even if he does, will his hot streak still be there? Even so, he is a great presence in front of the net.
-Gary Roberts, who has been suffering from pneumonia, may play in Game 1.
-Look for the first team scoring to be a pivotal factor, as NHL.com points out. 10 times in this year's Playoffs that both Pittsburgh and Detroit have scored the game's first goal. Pittsburgh is 10-0; Detroit is 10-1. No other team scored first more than seven times. That NHL.com article has some great stats there, including lifetime stats between the 2 teams. Check it out.

Predictions from Gurus everywhere. Borrowed from Faceoff.com. Thanks guys! 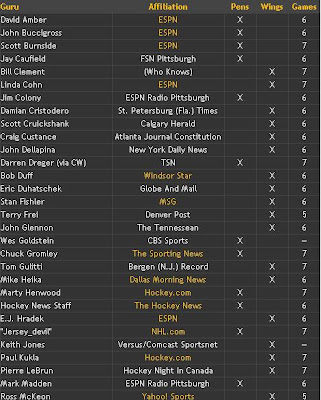 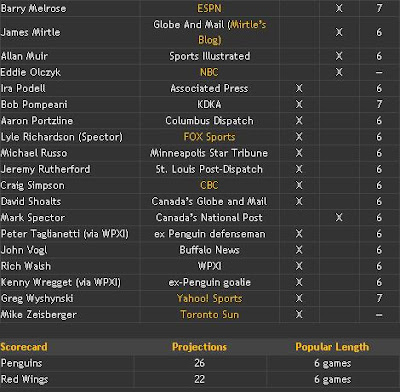