Paul Maurice fired / Leafs may be talking to Dave Nonis

Share All sharing options for: Paul Maurice fired / Leafs may be talking to Dave Nonis 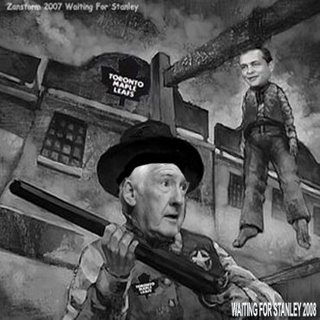 "You know the way the season ended up and the changes that are going to take place on the team," Maurice told The Canadian Press from his Toronto home. "So I was very aware that it was a possibility.
I can't say that I was surprised."

Me neither. After missing the playoffs for consecutive years under Maurice's reign, you knew his ass was on the line. What I really don't get is how and when his strategy changed from coaching the Cup Finalist Hurricanes in 2002 to the past couple of years coaching in Toronto. That Carolina team was so stingy defensively, yet this current batch of Leafs didn't play that way at all. Was Maurice not preaching it? Or were the players just not listening?
Either way, changes had to be made, and now Cliff Fletcher has yet another decision to make. I say: bring back Pat Burns!!! He'd whip these schmucks into shape.
While the Leafs ranked about in the middle of the Eastern Conference in goals for, their goals against was amongst the worst in the NHL, ranking them near teams like Atlanta, Tampa Bay, and Los Angeles. Like I have said all along, it doesn't matter what goalie you put in between the pipes in Toronto, his numbers are going to go down. It was Raycroft the previous year and Toskala last year. As long as they have buttheads like McCabe on the blue line, they are fucked. The next coach has to either get McCabe's ass on board or bench him. And that's just one example of one Leaf player of many that need to step it up. Ironically, one of their best 2-way players in Chad Kilger was shipped to Florida. I still don't get that.
Fletcher obviously didn't like what he saw in Maurice.

"There will be discussions, but you can be sure of one thing," Fletcher told the Canadian Press. "The person coming in is going to be a strong hockey person and he's going to have very definite opinions of his own."

Yeah, yeah yeah, just get a guy who can get these bums on the same page. All of this talk of the Leafs not having the "right players" for Maurice to work with. Besides the defensive lapses, a good coach can make a bunch of neandrathals work as a team.
This whole shit heap just makes me think of the Flyers. They majorly overhaul their team and soon thereafter they are in the semi-finals. Amazing.
TSN is also reporting that it's sources have heard that the Leafs have asked the Canucks for permission to talk to Dave Nonis about a GM job. Maybe this is a stupid question, but why would the Leafs have to ask for permission? Nonis is fired and available. We'll see what happens here. Nonis would do a fine job in that mess that is the Leafs organization.