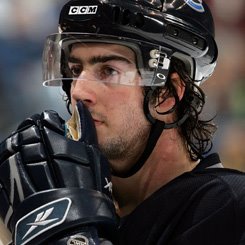 Reports say Bourdon crashed his motorcycle in northern New Brunswick this morning. Bourdon, who was a native of Shippigan New Brunswick, had apparently taken up mortorbiking as a hobby in the last few weeks and was riding his father's bike up until a couple of days ago, when he bought his own bike, reports say.
Drafted 10th overall by the Canucks in 2005, Bourdon was a very promising defenceman who had improved his play dramatically this past season and would have probably secured a full time roster spot with the Canucks this coming season. Bourdon, in my estimation, would have been at least a top 4 defenceman.
A tragedy in every form of the word. This is a shocking and depressing story. I still can't believe it. The guy was one of my faves all year long.
I am thinking about the Bourdon family right now and hoping that they can cope with this loss in the best way possible.

A statement from Mike Gillis today:

"We are deeply saddened by today’s news and on behalf of the entire Vancouver Canucks organization, I would like to extend my sincere sympathies to Luc’s family," said Canucks General Manager, Mike Gillis. "Luc was an extremely talented player with a bright future. He brought great passion to the game and was a valued team member on and off the ice. He will be greatly missed."