It's a Russian takeover!!!

Share All sharing options for: It's a Russian takeover!!! 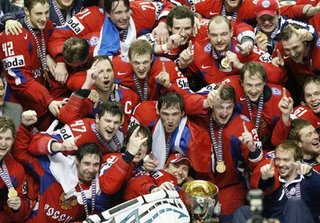 The joys of being married to a Russian wife. She threw a few verbal jabs at me when Kovalchuk scored the OT winner as the Russians beat the Canadians today. But you know, it didn't really bother me all that much. I am a big fan of most Russian players, especially those that play with heart. And boy, there was a lot of that in Russia's game on Sunday.

"Right now we are the champions of the world and it feels so great," Alex Ovechkin said. "It’s really special to win here because this is hockey and it’s a hockey-mad country.

I should feel some anger over that statement out of patriotism and competitiveness but really, Canada has won so many of these and this was Russia's first gold medal win at the IIHF Worlds since 1993.
A hell of a game. And a hell of a celebration by the Russian squad afterward. I don't think that 80% of the team could hold a tune as they sang to the Russian anthem, but it still gave me chills listening to it. Seeing Kovalchuk cry with joy. Seeing the players grab the CBC camera and say hello to their mothers half way across the globe. Good stuff.
Congrats to the Ruskies. They deserved it.
You'd have to think that Evgeni Malkin wished he was there today, but he got an even bigger reward....a berth into the Stanley Cup finals. Malkin is unreal. But so are the new crop of Russians playing in the NHL. These guys are taking over. Ovechkin (best player in the world...not Crosby), Malkin, Semin.....and who can say enough about what Evgeni Nabokov did not only for the Sharks this season, but also what he did for the Russian squad as they pushed for gold. Nabby saved their butts earlier in the game when they took way too many penalties. He is a force and, as TSN put it, a stabilizer.
Check out these highlights of the game in Russian. Think those guys were excited about the gold medal win?