The Issue of Goaltender Interference

Share All sharing options for: The Issue of Goaltender Interference 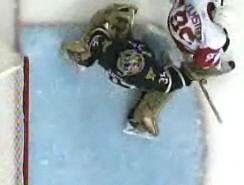 The Wings almost justifiably have a good case in the disallowed goal due to Holstrom's "interference" with Marty Turco in last night's 3-1 Wings loss. Or do they? Turco would disagree.

"I couldn't move freely to make that save on the shot," Turco said. "I really don't think it's a bad call. I don't think it's black-and-white like it used to be. It's the referee's discretion."

"Move freely." Was that the case last night? Yes it was. But if you look at the picture and the video clip of it, you can see that Holmstrom was not in the crease. His ass wasn't even in the crease.
The goal was immediately called off more because of Holmstrom's past, both recent and long-term. Earlier in the game, Holmstrom had crashed into Turco but the Wings were barely able to score. In Game 3, Holmstrom clearly made some form of contact with Turco and was in the crease when the Wings scored.
So what can be done about this?
For one, goalies need to be able to make the save and not be hindered, as long as they are in their crease. Do we want to bring back the "no skate in the crease" 1999 fiasco? No. There just needs to be no contact with the goaltender when a shot is taken, unless the goalie's teammate pushes the opposing player in.
I can see the flipped side of this argument though. If the NHL cracks down on the Holmstrom's and Ryan Smyth's for goalie contact, then why wouldn't the goaltender just come out to the top of his crease to stop a shot and fake the interference? In other words, make contact with the net crasher and sell it as interference. It could-would happen.
The best solution in my mind is to go with what the TSN panel came up with, and that would be video reviews on these incidences. Let the guys in Toronto deal with it. It's a big issue and a big deal. Holmstrom shouldn't have his way in or near the crease the way he has in the past. He just needs a few restrictions on what he can do there.
We don't really want this type of decision affecting a Stanley Cup Final game by turning momentum in a series or becoming the Cup winning goal. Just ask Brett Hull. His Cup-winner will forever be tarnished by a blown non-call because his foot was in the crease when he scored the OT game winner for the Stars in 1999. A decision needs to be made now, much like the Avery-Brodeur situation.
Until then, Dallas was dooped by the refs' call in Game 3, and Detroit was screwed in Game 4.
On a separate note, isn't it amazing how much more control the Stars had when they actually managed to score the first goal of the game for the first time in the series? Detroit's stinginess drops when that happens and the Stars had better oportunities for once. Good to see the Stars get their shots off quicker as well. Hopefully they can have the same fortune in Game 5 to make a series out of this.