I don't think Vigneault will be fired....yet

Share All sharing options for: I don't think Vigneault will be fired....yet 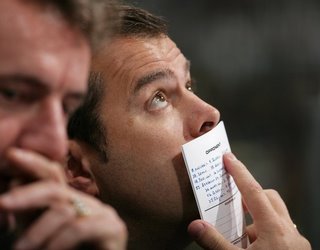 There has been no reports of the status of Canucks' coach Alain Vigneault, who had met with Mike Gillis and Canucks management this past weekend in Las Vegas. I guess with all the hookers and gambling they never got around to talking business. OK, I kid. But don't you think that with Nonis already axed that the Vigneault firing would have soon followed? Especially if a major shakeup was in place.
Deciding on the status of the current head coach was quoted as Gillis' top priority after he was hired.

Mike Gillis says making a decision on his coach is the most important task he faces in the immediate future. He will sit down soon with current coach Alain Vigneault, who has a year left on his contract. That was from the Vancouver Sun.


I would bank on the 2 parties talking team direction and dollar values this past weekend. Now there are a lot of Vigneault haters out there, and I am not one of them. I think he has done a decent job with what he was given. Benching the Sedins might be a nice change on occasion, but aside from that, I like what he has done, playoffs or not. Give him 3 more guys that can actually put the puck in the net and the haters will disappear.
I know that Gillis offered up a bit of support for Vigneault during his press conference after the Nonis firing when he said:

"Coaches handle the assets they have been given," he said. . "The assets here were lean at times."


This makes me think even more that Vigneault is going to stay on board if a contract that makes sense is met. He will not be fired as part of an overhauling process.
Who knows. I could be wrong. It's just my opinion that Viggy is not going to be turfed unless the Canucks lose 10 in a row next season. Until then, he has Gillis' vote of confidence.