Share All sharing options for: Empty seats at the Joe Louis Arena still a hot topic / The Octopus Legacy 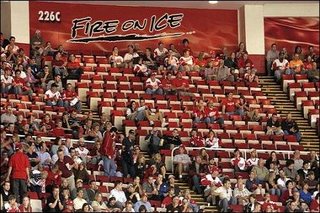 On top of a successful NBA franchise being in the NBA playoffs, Detroit Free Press columnist Gene Collier offers more reasons why the Joe isn't always selling out.

Add a couple of conspicuous post-season collapses, and there's trouble in Hockeytown.

"No matter what kind of hockey town you are, baseball's always going to beat you," said Gene Myers, sports editor of the Detroit Free Press. "The hockey lockout [in 2004-05] really ticked people off, and a lot of hardcore hockey fans just couldn't wait to come back and hate the new NHL. ...

"When they won in 2002, nothing could have been bigger. But Steve Yzerman retired. Brendan Shanahan went away. Sergei (Fedorov) went away. Scotty Bowman went away. And some of the new players haven't really established an identity like those guys.

"Their ticket problems are mostly traceable to the economy, which is really bad, but the Pistons had the same problem in the '90s when the Bad Boys dynasty disintegrated. The Pistons, though, had a much more corporate fan base. They were great marketers and they worked their butts off. The Wings never had to do that. When things started going backward for them, they didn't have the mechanism to react. I have season tickets, but I don't want to go to 40 some games. I do want to go to seven or eight or nine, and I never had any trouble selling the others, but now all of a sudden I can't sell 'em.

The article is well worth the read. Check it out.

Paul.Klos had made these comments about the matter a couple of weeks ago on this site that I thought were spot on, as far as I was concerned.

So sure, there is no more Yzerman or Shanahan in Detroit, as the one article mentioned. They were the golden boys. But Datsyuk and Zetterberg are getting it done. Why are they less marketable? Is it because they are European? Is it because they are less charismtic? Maybe it's not really the issue. Hey, I thought this NHL 08 Zetterberg commercial was funny.
Datsyuk may seem emotionless in his facial expressions, but I'll take him over a Naslund or Sedin any day. Check out these Syuk highlights. 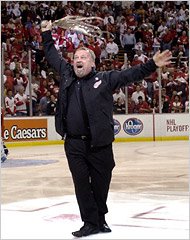 A lady asked me why this guy was waving an octopus that had been thrown onto the ice in Detroit in Game 1 of the Finals. She also said "Eeeewwww." I couldn't answer the question except to say that that I thought the 8 legs represented something during the playoffs. The 8 wins part made no sense but I should have known better. The tradition of the octopus has been around for a long, long time.

The octopus first made its appearance on April 15, 1952, during the Red Wings' Stanley Cup playoff run.
Two Detroit brothers, Pete and Jerry Cusimano - storeowner's in Detroit's Eastern Market - threw the eight-legged cephalopod on the ice at Olympia Stadium. Each tentacle of the octopus was symbolic of a win in the playoffs. Back then, the NHL boasted only six teams, and eight wins (two best-of-seven series) were needed to win the Stanley Cup. The Red Wings swept the series that year, and the Octopus has come to be the good luck charm ever since.