Brendan Morrow epitomizes what a captain should be

Share All sharing options for: Brendan Morrow epitomizes what a captain should be 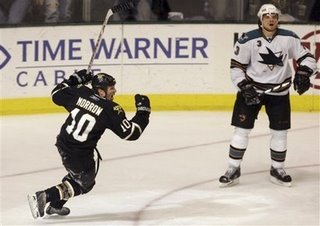 "Because they played two games last night," Wings coach Mike Babcock joked today, "we got to watch them even closer."

The Wings had better look long and hard at this Stars squad, and maybe put a little extra padding on as well when they face a tough team in the Western Final.
What a game last night. Those are treats to watch, even though they go late into the night (well, for you people in the east.) I couldn't feel any worse for Evgeni Nabokov. He did everything he could in net, including make the best save of the playoffs. But it wasn't enough.
Enough cannot be said about Stars' captain Brendan Morrow and his performance in these playoffs, but especially last night. Is there anything he can't do? First he kills Milan Michalek with a shoulder-separating hit, then he goes out and plays with a vengeance in just over 3 overtimes, eventually bagging the winner.
His eyes bulge out of his head when he scores. He is a man possessed. When he smoked Michalek at the end of the 3rd period, he almost payed no attention to his foe laying hurt on the ice. Nah, he just walked to the dressing room and prepared for battle in overtime.
Morrow epitomizes not only everything that I like about hockey, but also everything I think a team captain should resemble. Morrow has 7 goals and 11 points in 12 playoff games now. That would place him 11th in points and 5th in goal scoring. But he doesn't have to lead the NHL playoff scoring list. He could win a Conn Smyth with those stats plus with his play alone. Now imagine if Joe Thornton played with as much grit. As great as Big Joe is as a playmaker, he doesn't use his size very often when it matters most. Can you count how many times he dumped the puck in the opposing zone corner and let someone else from his team go fetch it and do the dirty work?? How many times could Thornton have drove to the net much like Bertuzzi used to do? But he doesn't. He's perimeter and he's not good enough to lead a team to the Cup. Face it.
We'll see if the Stars have what it takes to beat (I'm sure) the favored Red Wings. But one thing is for sure, those dangly little skilled Wings had better keep their heads up. I'm a vengeful bastard. I want to see Datsyuk, Franzen or Zetterberg get hit like that. God, I hate the Red Wings.
It's going to be a great series. I think the Wings have met finally their match in these playoffs.
I got this series going 6 games with Dallas taking it, against all odds. They are such a patient, yet determined bunch. And Marty Turco.....the critics have left the building.