Share All sharing options for: Anatomy of a Failure, Chapter III: Offense 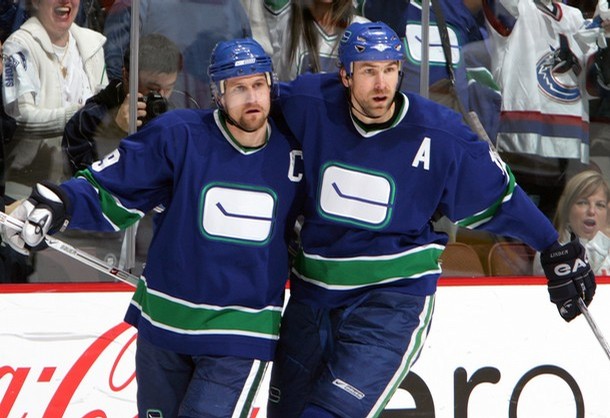 Every one of the teams in the second round had an aggressive offensive flow lead and supported by some of the most talented guys on this planet. It's not all the big ticket names either: new guys like the Kostitsyns, Umberger and Pavelski, out of nowhere guys like Clowe and Franzen, agitators like Ruutu, Morrow and Avery, veterans like Roenick, perennial post season no shows like Hossa and Briere (OK those are big names), the list goes on. The post season brings out the best in these guys. In the first and second rounds especially: scoring often isn't an "if", it's a "when".

The Canucks, by contrast, have a story we all know by now: scoring is an "if" every 60 minutes of ice time they got.

Before moving on, one more shout out to Luongo and the blueline who kept this team in the hunt far longer then expected. By viewing the team's offensive totals, it's clear just how good (or lucky) their back end really was. When stacked up against the rest of the NHL, most of Vancouver's offensive stats are stuck somewhere in the middle of the pack but some of the more alarming numbers include ranking 18th in 5-on-5 scoring, 18th in powerplay production and 24th in shots per game. I'm no expert, but if you're lingering near the lower third in the league when it comes to even-strength and powerplay scoring and near the bottom in total shots, then playing 40 one-goal games and getting 10 OTLs doesn't seem terribly shocking.

In total the Canucks scored 213 goals all year (23rd in the league) while surrendering only 215 (or roughly 2.51 a game which is 7th best in the league, in the same family with the Red Wings, Rangers, Devils and Stars). Those margins for victory last year? Razor fucking thin.

The takeaway is that (A) Luongo is God even when distracted and overworked; (B) the defense, while riddled with injuries, didn't totally fall apart; and (C) the offense wasn't a complete disaster, just all around below average. What don't you see when you look at the rosters for Detroit, Dallas, Pittsburgh and Philadelphia? You don't see a phenomenal goaltender supported by a below average offense (with the exception of NJ perhaps, I don't think you can say that about any of the 16 teams who made the playoffs). That model won't cut it in this NHL and doesn't really make for great hockey for the fans. I sense Aquilini wasn't too keen on this scenario enduring any longer.

Daniel and Henrik Sedin: These slap-passing, down-low cycling demons took the league by surprise last year and were fully expected to carry this team once again. Sometimes that worked (remember this?) but most teams figured out playing more aggressively against the twins and calling their bluff on the slap pass would negate most of their game. Their yearly totals weren't even that bad - Henrik had 76, five less then last year and 10 assists off his franchise record from last year and Daniel had 76 points, ten less then last year and six goals off from last year - but a common complaint was that they disappeared when needed down the stretch (though Hank had ten points in those final games and Daniel had nine). The bigger issue is that they are easy to shut down when ability to cycle is gone; their game is slick and finesse, not gruff and hard-nosed. That facet of their game is sorely lacking.

Markus Naslund: Ahhh, the favorite whipping boy of forums, chat boards and surly German dictators alike. And why not? Glancing at the numbers we should absolutely crucify a guy who we got in a joke of a trade, survived the Keenan years, was the star of the best line in hockey a few years ago and now currently holds the franchise records in points and goals, tied for first in hat tricks and third in games played and assists. He's clearly absolutely worthless. Naslund-haters will say he hasn't been worth his salary since Todd Bertuzzi'ed Moore and that's more or less true, but neglecting to reference his list of injuries, the team's transformation to a defense-first squad and his lack of any true supporting cast should also be taken into account. Even with these handicaps, Naslund has still put up 79, 65, and 55 point seasons respectively, not worth $6 million a season but not something that should be as universally bashed as it is either. The thought that Naslund can be productive again if you remove the C and get him some actual players that compliment his skills I support fully (and if not ask Mike Modano how he feels on the subject). I would welcome him back but recognize he may be gone as this team prepares for yet another transformation. Mark my words: some team will pick him up for cheap and he'll be back in the 65-75 point range. Christ, imagine him on Pittsburgh. I digress...

Taylor Pyatt - Lost in the (rather short) list of successful Dave Nonis acquisitions was Taylor Pyatt for a fourth round pick in 2006. Pyatt went on to have a career year last year and is one (no, the only) guy on the team who can legitimately score, cause havoc in front of the goal and drop the gloves if need be. Though moved off the Sedin line and bounced to various lines throughout the season, Pyatt tied his career best in points (37) and is under contract for one more year at $1.575 million a year. Cheap and effective when he decides to play a smart game, Pyatt could improve on these numbers on a remixed roster or, I would think, be an easy guy to move.

Ryan Kesler - Vancouver fans have been waiting since the first round of the 2003 draft to see the Kesler show begin (all the more pertinent since Kes was drafted ahead of Mike Richards and Corey Perry). Last year their was a glimpse of it, but Kesler transformed into an effective shutdown centerman as well as adding some offensive punch, netting a career-best 37 points (21G, 16A) and becoming one of the few bright spots on offense. Kesler's ability to play at both ends of the rink and create misery for the other team (I imagine he's off the Christmas card list from the Prongers or Boulerices) makes him an obvious building block for years to come.

Alex Burrows - The last piece of the pest trifecta the team used to have (with Cooke and Kesler), Burrows had a career year with 31 points (12 G, 9A), 193 PIMs (almost double from the year before), a mind-numbing +11 (the best on the team) and lead the team with three short-handed goals. Alongside Kesler, Burrows stood out by helping shutdown the oppositions best players and providing that special level of agitation we love so much (the "potato farm" joke on Aaron Downey was good stuff). Coming off a career year and signed through next season at a paltry $525,000, Burrows isn't going anywhere (and now I have jinxed him so expect him to be traded for a bag of Swedish fish in August).

Brendan Morrison - A season to forget, Morrison's 25 points (9G, 16A) were his worst totals since he came into the league in 1997. Wrist surgery and a torn ACL limited Morrison to only 39 games, snapping his 542-game ironman streak (though he still holds the franchise ironman record at 534). The bigger question this offseason is what to do with Morrison now as an UFA? Does Gillis pony up $3 million for a guy who's production has slipped steadily since 2003 and now will be returning from a major surgery? Since Vancouver's lack of depth at center is nothing short of legendary, I can see the scenario where Morrison returns for cheap and accepts his role as a third line guy (behind Kesler and Henrik). But a first line center he is not nor should be paid as one.

Mason Raymond - Raymond's speed alone made him a fan favorite in GM Place and his 21 points (9G, 12A), while not Calder-worthy, were huge to a team with few weapons. In fact Raymond has a lot working in his favor (including being signed through 2010 on the cheap), so assuming that his season-ending knee surgery doesn't affect his game, he is another asset that Gillis could build around or move. I tend to think he'll stick around in a third or second line role and given ample opportunity to build on his first year totals.

Raymond Shannon - I really want to like this guy. Think about it: a guy who got two less points last year in nearly double the amount of NHL games with the former Cup champs and was acquired for damn near nothing (that's right, I said it. King is nothing). But I am not sure where all 5'9'' lbs of Shannon is going to live on a team that has to compete with the big dogs of the West. He's not cracking the top six and do you really need a speedster on your fourth line? I see a lot more AHL time in his future.

Trevor Linden - Trev was all the more honorable this year not in his offensive output (12 points ranks as the worst season he's had ALL career) but that he dealt with a coach who was short on men/talent and chose to sit the veteran. As long as Vigneault is coach, Linden shouldn't come back. I can see a need for Trev to return on a rebuilt team that could use some damn leadership, but we all see the writing on the wall (and, as I said that night and would like to say again, the Flames were a classy act for sticking around after slaughtering the Canucks to shake his hand. Two thumbs up for Iginla). Better times lie ahead, but not on the ice. When #16 hits the rafters will be an awesome night.

Byron Ritchie - Part 1 of 2 of Nonis's free agent signings from last summer, Ritchie offered a forgettable 11 points (3G, 8A) while being a permanent fixture on the fourth line and PK units. Another guy I wanted to like, but after a season of watching him it's obvious why Calgary wasn't racing to resign him. He's a gritty guy who is still too small and doesn't offer the team anything truly substantial that they can't find in Manitoba or through free agency. He'll land somewhere, but not here.

Brad Isbister - Part 2 of 2 of Nonis's free agent signings from last summer, a guy who's been lavished with all kinds of "power forward-capable" compliments was kind enough to give the team 11 points (6G, 5A). It's actually pretty fitting that we round out the look at Canuck forwards with Isbister since he embodies so much of this year's results: sounds great on paper, but terrible out on the rink. Like Ritchie, Isbister will land somewhere where he can be the fourth liner he should be and not playing in the top six like we occasionally saw him doing.

Ignoring Cooke, Jaffray, Pettinger, Rypien, Beech, Cowan (puke), Brown and Hansen, there's your cast of characters that couldn't get the job done. It's feasible (and in a weird way sort of comical) that Gillis could actually get rid of the entire offense this off-season. Think of it, when the Sedins are pseudo under the gun if the new GM questions there first line-ish capabilities, anything is up for grabs.

Of course he won't do that. Kesler and Burrows aren't going anywhere and, unless he can pull the trigger on a gem of a deal, neither are Henrik or Daniel. Outside of those four, we have no idea who is coming back. Emotional attachment aside, that is a fantastic thing. Wouldn't you rather be getting psyched like your fellow Pennsylvania fans are these days?