Zany's take on the playoffs so far: Avery, penalties, dives and Thornton

Share All sharing options for: Zany's take on the playoffs so far: Avery, penalties, dives and Thornton 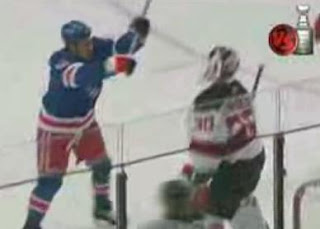 I find it very difficult to post anything during these playoffs lately. That is, until yesterday's games and events.
Some days I can hate Sean Avery. But I really couldn't help but laugh at what he was doing to screen Martin Brodeur during Sunday's game. That was awesome comedic stuff. Brodeur was bewildered.

"I've played for 15 years in this league. I've been watching games for 33 years. I had never seen that in my life," Brodeur said. "I don't think that kind of behavior should be done in front of the net, but there is no rule for it."

Well, the NHL changed that in a New York minute. Today the NHL quickly added a new rule and stated that "An unsportsmanlike conduct minor penalty will be interpreted and applied, effective immediately, to a situation when an offensive player positions himself facing the opposition goaltender and engages in actions such as waving his arms or stick in front of the goaltender's face, for the purpose of improperly interfering with and/or distracting the goaltender as opposed to positioning himself to try to make a play." Those are the words of Colin Campbell.
And you knew he had to do something about it. If Avery got off free from that, then you'd be seeing that type of screening in other games as well...really quick-like. But you have to hand it to Avery. For a guy that acts like a meathead most of the time, he found a little grey area in the NHL rulebook and flaunted it for the whole world to see.
I got a great laugh out of that. 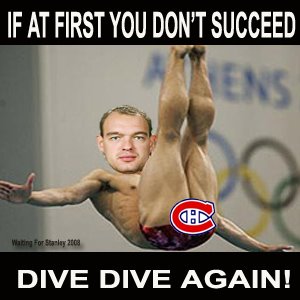 I am overly sick of all the damned penalties though. The inconsistencies of calls, the dives, the blown calls, the even-up calls. Christ, this sport is turning into soccer.
Out of 96 goals scored in the playoffs so far (thru Sunday), 32 of them were on the powerplay. That is about 33%. Seem a little high? I had originally thought it was a lot higher. In 19 playoffs games, there have been 176 powerplays. That's 9 per game average.
I'd like to do a percentage of those that were dives or embellishments, but I've lost track. With the refs calling the penalties even more in the OT's now than before, I don't want to see too many games being decided by weak or chincey calls, let alone a Stanley Cup-winning game. Can you imagine a dive deciding a Stanley Cup Finals game?? I shudder at the thought.
It's just too many penalties for me regardless. I'd like to see this obstruction rule go away, or for the players to stop putting their sticks on opposing players. Either/or. Just make it stop, please.
What a win by Calgary last night. And what a performance by Curtis Joseph. Good to see ol' Cujo back up his "I still have a lot left in me" statement.
Now, is this the knife in the back for San Jose? It could very well be. All I know is 2 things:
1. Nobody is bashing Mike Keenan now.
2. Joe Thornton is not proving himself and does not have anything more than one dimension (or gear) in his game. He constantly floats in both zones and looks like a damned slug. But if you get the puck to him behind the net and the opposing team gives him a bit of space back there, then LOOK OUT! But that's all I'm really seeing from him.
Patrick Marleau however, played a heroic game despite the loss, and really bounced back ofter Cory Sarich decked him.
Marleau and especially Nabokov called some players out after the game. From the Sharks' site:

Goaltender Evgeni Nabokov was very direct in his postgame comments about some "boys needing to act like men" and his teammates backed up those thoughts.
"Some guys aren’t pulling their weight," Marleau said.

Yeah, that includes YOU, Thornton. Prove yourself in the playoffs for once. Hell, the guy reminds me of an oversized Sedin sometimes.