Which team can come back in their series?

Share All sharing options for: Which team can come back in their series? 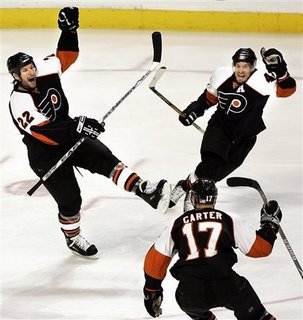 With one series being over and six others being on the brink of being over, let's go through the six and analyze which team has a chance at making a comeback.

Canadiens-Bruins (Habs lead series 3-2).
We finally saw the human side of Carey Price last night. He let in 2 very soft goals in the 3rd period last night in a 5-1 loss and appeared to have lost his focus. Is this the end of Price's run? How will the youngster handle the pressure after a poor performance like that? I don't know him well enough to answer that, but he did say that he doesn't have very many bad back-to-back games and vows for a better performance in game 6. But this series just got a hell of a lot more close than it should have last night. Game 6 is going to be great in all of its importance. Jeez, the Bruins are explosive sometimes, and Tim Thomas is ......well, a god actually. I can't predict the outcome of this one, but the Bruins have the momentum now. If they win game 6, they may have a lock on game 7.

Flyers-Capitals (Flyers lead series 3-1).
I think you can almost bank on this series being over. The Capitals were so red hot going into these playoffs, that I wondered if the young team would cool off if they finally lost a game. That is what has happened. Ovechkin has been silenced and is on the verge of losing it. Sergei Fedorov can't hit an open net. Yeah, this series is ending up the way it should have, I suppose. The Flyers are rolling along just fine.
I haven't seen so many giveaways in a series in quite a while though. Sloppy hockey, but very entertaining hockey.

Avalanche-Wild (Avalanche lead series 3-2).
The Avs have won 2 games in a row and have outscored the Wild 8-3 in that span. The comeback player of the year, Jose Theodore is playing so damned well right now. A guy named Gaborik, whom the Wild are relying on in order to have any chance, is pulling a whodini act and is pointless in the Wild's 5 games so far (19 shots though).
I would consider this series to be all but over in 6. Next game is in Denver. 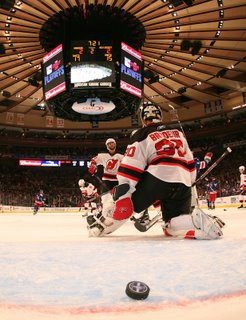 Rangers-Devils (Rangers lead series 3-1).I think the Rangers remind me of the Hurricanes when Carolina won the Cup a couple years back. Their defence rarely offensively contributes in goals but is sharp in their own end. The depth in forwards is killer. Lundqvist is playing like Cam Ward did. Is anyone going to stop the Rangers? The Penguins might in round 2, but the Devils won't in round 1.

Stars-Ducks (Stars lead series 3-1).
The Stars have barely let up on these Ducks the whole series, and are about to finish off the defending champs. Dallas' hustle is pretty much second-to-none in these playoffs, and if anyone is still questioning Turco's ability in the playoffs, they need a bullet wound.
Hey it's never over until the fat lady quacks right? Somewhere in the world I can see Oprah Winfrey standing in front of a mirror, ready to start making Duck noises.
Oh, and thanks for comin' Bertuzzi! (not) Nothing makes me happier than seeing Bert and the Fowl teeing off early.

Sharks-Flames (Sharks lead series 3-2)
Never count out a team from Alberta. As well as the Sharks are playing right now, it's not great enough to convince me that the Flames can't come back in this series. No lead is ever safe in this series, and that is one big reason why it's so fun to watch.
Look out for Cheechoo though. He seems ready to heat up.
Joe Thornton to me, is a cross between the Sedins and Bertuzzi. He has the speed and skill for a big guy, but he doesn't always use it to his advantage. Errant passes get intercepted. He doesn't always shoot when he should. Brilliant at times. Ass at other times. Not a clutc guy as much as he could be.
The real dudes on this team are Patrick Marleau and Ryan Clowe. By the way, the Canucks NEED to acquire Marleau this summer. Wouldn't he be a great fit?
Out of all the nearly-finalized series' left, I'd say the Flames have the best chance to come back. Next game is in Calgary.

What are your thoughts? Do you disagree with me on any of these points? It's ok, you can tell me if I'm full of shit.