Share All sharing options for: Vigneault-Nonis end of the year press conference

Here are a few quotes by Nonis and Vigneault at the conference.

Vigneault: "Our system enables players when they don't have the puck to get it back quickly. Once they have the puck, it depends on the individual skill level and the makeup of the team at that time." Nonis didn't like people refers to the Canucks having a "system."
"Considering the adversity that we had been faced throughout the year..to still be in a position where we were challenging for first place in our division said a tremendous amount about this group of players and about their commitment to themselves and their commitment to the organization and to the fans."
Viggy could not come up with an answer as to what happened in the final 2 weeks of the season. Management is going to assess the situation and come up with the right decisions for change.
For more of the Vigneault press conference click here.

Nonis: "I think that down the stretch a couple things happened. You're looking at a team that I think that in some respects ran out of gas in certain areas and injuries over the course of the year took a significant toll particularily on our back end and we were asking players to do things that they were able to do over short periods but maybe they weren't capable of doing for the whole year." 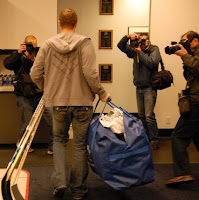 "Our March schedule was not helpful, but I truly believe that if we had a healthy team then we are not talking like this right now."
"I expect that you'll see a much different group once we get to training camp."
"We're going to be a team that actively pursues a number of player all over the lineup. We'll be very active in that area. We have significant amount of cap space."
"I wouldn't have any problem trading even a group of players in order to bring the right players in."
Click here for more of the Nonis press conference.

You get the sense from Nonis that Naslund will be let go, as he is anticipating a lot of cap space. I can't wait to see who he gets, however, like he said, the free agent market is not that deep this year.
You can also guarantee that Vigneault is not going anywhere and that Nonis has faith in him.

The individual Canucks awards winners can be seen here.