Share All sharing options for: Thursday NHL Links and stories

A crazy story coming out of Montreal:

The city's mayor is seeing red - and white and blue - after firefighters painted several fire stations to show their support for the Montreal Canadiens.
As the Habs prepared to face the Boston Bruins in the first game of their playoff series on Thursday, Mayor Gerald Tremblay was getting ready to send in work crews to clean up the impromptu paint jobs.
"And we're going to send the bill to the (firefighters') union... it's tolerance zero," he said.

I guess the point there is that the city is trying to stop the grafitti issue and it doesn't help deter the issue when firefighters paint Habs logos all over the stations. Check out the rest of that story. It's a good read. Hate to say it, but I agree with the mayor on that one.
The Ottawa Sun also had a piece on the reaction of Sens fans after the game 1 loss to the Pens. One fan quipped:

When the boogie-man goes to bed, he first checks his closet and under his bed for Gary Roberts.

Indeed. Gary Roberts was playing on the 4th line and was a force out there. Even though I hate the Pens with all that I am, I really am a big fan of Gary Roberts. He just keeps ticking, and looks to be a Sens killer again. Sens fans seem to be feeling quite pessimistic right now, and I don't blame them. But like one fan said, "suck it up and cheer for the team to turn it around." 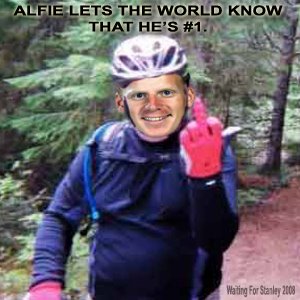 Word is that Alfredsson is only riding and exercise bike at this point and is recovering from neck and back injuries. That means that he probably won't play in round 1. Hey, I or you can say all you want about European captains, but this is a serious blow to Ottawa. Alfie proved himself to be a great leader in last year's playoffs.
Can you believe that the Sharks finished the regular season with an 18-2-1-1 record? It's no suprise that the Flames win over San Jose was a shock. What are they planning to do to change their fate?

"We just need to get more traffic on him," Sharks center Joe Thornton said. "We gave him shots that he saw and when he sees the shot he's going to save it every time. We're going to have to work for our goals this series."

There is a potential upset in the making in this series, but can you really trust the Flames to be consistent and finish off the Sharks? Not me.
Sure, Martin Brodeur gaffed on Callahan's go-ahead goal last night and the Rangers never looked back. But that's not the point. The Devils need to score more goals, and it doesn't help that captain Jamie Langenbrunner, who is a player that can get this team rolling, is pointless in his last 5 games. He also only has 2 goals in his last 14 games. If Langenbrunner doesn't snap out of it, the Devils are probably done. Oh yeah, you can also tack on the fact that Scott Gomez looks primed to bury his old team.
More bad news for the Devils: Brian Gionta is nursing a "sore side". He did not play much in the 3rd period last night.
Even more bad news for New Jersey: What the hell is wrong with Patrick Elias? His production has tanked for too long.