Share All sharing options for: Thoughts on tonight's Game 7's 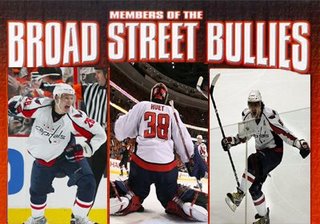 It is difficult to pick the Flyers to win tonight's game against the Caps. The Caps have caught fire again and must be primed after erasing a 2-0 deficit in Game 6 and winning 4-2 to stun the Flyers and their fans in Philly's building. Ovechkin had not scored a point since Game 1 and the pressure was building. Even amongst all the tight-checking and banging done to him, he broke out last game, scoring the winning goal and the killer 4th goal. The Caps are not a 1-man team. Teaming Semin with Backstrom has proven to be magic, while Kozlov, Fedorov and Alex play well together as well.
Bad news for Philly indeed. They are going to have to buckle down and score in bunches to beat the Caps. But that's a tall order with Huet in net.
I say the Caps win 4-3.

I'm not sure when or how it's OK for Thoreson to push the Caps D-man into Huet and then Kapanen scores, but that's how it was. In the end, I thought the Capitals were explosive, but the Flyers put out a massive gutsy effort. No Gagne. No Knuble. These Flyers are good.
Nice touch by Ovechkin by saluting the fans. OV is THE MAN. 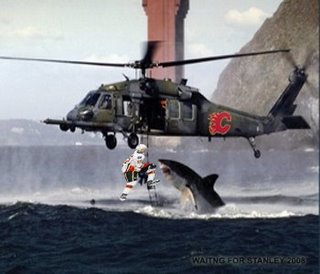 You can toss the Sharks into the big heap of trouble as well. What is it going to take to inspire these guys to match the Flames' physicality and desire? Does Thornton need to snort a bowl of coke before he goes out there? How about Michalek and Campbell show something? Do Ryan Clowe and Nabokov have to do it all by themselves?
You know what will help here? Home ice advantage. That had better fire these guys up, or Ron Wilson is going to be fired by next week. Maybe even the return of Jeremy Roenick (after being a healthy scratch last game) may help.
I got the Sharks winning this one 2-1, even though I have lost almost all of my trust in these guys and should be giving up on them by now.