This donut’s been dunked

Share All sharing options for: This donut’s been dunked 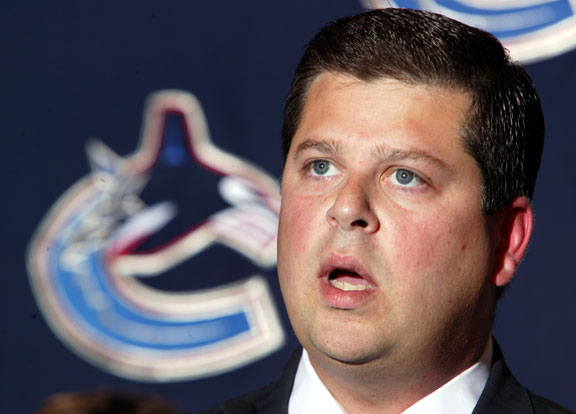 So there I was enjoying a damn fine sandwich at the local pub taking in yet another sad appearance by Ottawa against Pittsburgh (seriously, the Sens looked like the Canucks out there with their dump and chase, perimeter-only style of play) when the CBC was kind enough to run a crawl saying "Canucks Fire GM Dave Nonis". To which I interrupt the casual talk with one word..."Fuuuuck".

Though not surprising, I am shocked this came before any other announcement like "Hey we have Brunnstrom but no one to center him" or "We fired Vigneault and Alanah has his head on a pike on her front lawn" or "Vancouver drafts a legless midget in the first round of the 2008 NHL Entry Draft".

Nonis wasn't a bad GM by any stretch, but being average simply won't cut it anymore. Watching our former GM gut and rebuild the Anaheim squad into a Stanley Cup winner, Nonis gutted the Canucks as well, landing Mitchell on the blueline and Luongo in a steal that will now define his time here. However, rather the build up from there, he built sideways or down depending on your opinion... Santala, Chouinard, Bulis, Tremblay, Isbister, Ritchie, Miller and Pettinger do not a Stanley Cup contender make. Not finding a winger for your top line, not finding a second line scoring threat, not making moves at the trade deadline or all of last summer, essentially not complimenting the steal of Luongo with any semblance of a team that can win on the other end of the ice...all of these factors lead to today.

To his credit, the one thing Nonis did do was run his team in a fiscally responsible manner without trading any prospects or draft picks, a move that will just make life easier for the next GM. So either management moved too quickly in cutting Nonis loose before he finally had money to build the team as he saw fit or they did it just in time before he spent millions prying Ted Donato out of retirement to suit up with the Sedins. Take your pick.

So yeah Nonis is gone, Vigneault should be concerned and Naslund isn't likely to return. The revamping of this team took about a week to start. Didn't we just do this two years ago? Someone get Burke on line #1 when Dallas is done embarrassing Anaheim. If he wants a challenge, screw Toronto, we got all the crazy you need and a shorter plane flight.