Share All sharing options for: Roenick steals the show 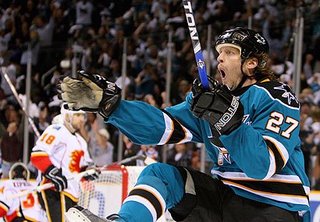 Nothing beats watching 2 Game 7's in a row. A busy but steady Martin Biron stalls the Caps while the stagnant Joffrey Lupul bags the series-clinching goal in the first game and then....of all people...The Mouth of the South Jeremy Roenick turns the clock back about 10 years tonight and absolutely steals the show. Roenick scored 2 goals and had 2 assists as the Sharks, aided by their home crowd, buried the stunned Flames 5-3.
Jeremy fricking Roenick. I think he has 6 goals and 2 assists in 7 career Game 7's now. It's amazing what happens when an egomaniac gets benched in a critical game 6, only to prove his coaching staff wrong and become a hero in the finale.
Jeremy fricking-assed Roenick. Yeah, I hate him. But when he does something like this, I have to respect. I didn't mind him in the Chicago days, and I don't mind seeing him play like this in a Sharks jersey.
The questions will now abound in Calgary as to what to do with the team.
That would have been the case in San Jose had they lost, but the better team won tonight.
I have to tip my hat to Owen Nolan, who really silenced my critical ass in this series. He was heroic.
Even though Kiprusoff let in one weak, screened goal, I wouldn't fault him too much for the loss. The Flames just couldn't contain a possessed Sharks team.
How much of a sigh of relief do you think Sharks coach Ron Wilson let out when the final horn sounded?
I have been knocking Thornton so much in this series. Tonight I thought he really put out a great consistent effort. He had 1 goal, played over 21:00, and really showed the consistent hustle that I thought he lacked throughout the series. Good on him.
On to round 2, where an even better team in Dallas awaits.
Jeremy fricking Roenick. I still can't believe it.