Playoffs Round 2 Thoughts and Predictions

Share All sharing options for: Playoffs Round 2 Thoughts and Predictions

Rangers-Penguins.
This wasn't the 2nd round series I wanted to see. I was hoping to see a NYR-Habs and Caps-Penguins series. But alas, the Rangers, who I am picking to win the Cup, have a series challenge ahead in Pittsburgh. Already, I am not liking what Jaroir Jagr told the media today, saying:

"With all due respect for [Sidney] Crosby and [Evgeni] Malkin, I don't think they are Mario Lemieux," said Jagr.
"I say that with all due respect because the game has changed.
The gap between the best and worst players on a team [today] is very small. The gap between Mario and the rest of the guys when I was in Pittsburgh was so huge he was able to score 20 points in one series. I don't think those kids are able to do it. If I am wrong I am going to apologize and [say], 'Great job.'

As fair as Jagr was trying to be in his statement, why the hell give Crosby and Malkin any further motivation? Check out the rest of Jagr's statements in the NY Post.
Tough series to predict. Who's the better goalie? Lundqvist. Who has the better offence? Pittsburgh..barely. I like the Rangers' experience up front a lot more. Better defence? On paper the Pens, but structurally and considering efficency, it's the Rangers.
The breaker: Pittsburgh is the higher seed and will enjoy home ice advantage. The Rangers won 5 of the 8 games these 2 teams played this season. They won all 4 games at MSG.
Probably no Gary Roberts in game 1. That's good if you are a Rangers fan.

Prediction: Rangers in 6. Should be a treat.

Canadiens vs Flyers.
The breaker: Montreal won all 4 games against Philly this season and outscored them 15-6 in the process. The top seeded Habs had their hands full with the Bruins in round 1, and I think Philly is a better team than Boston, hands down.
No Mike Knuble until later in the series. That is unfortunate.

Prediction: Canadiens in 7. This series is going to be awesome.

Red Wings vs Avalanche.
The breaker: The Wings won all 4 games against the Avs this season. But that doesn't matter. If Forsberg and Foote can stay healthy I think the Avs will take this series. Jose Theodore is at the top of his game now, where the Wings are having goalie issues. It looks like Chris Osgood, not Dom Hasek will start this series.
The Wings already had a few problems with the lesser Predators in the first round, and the Avs are better than the Preds.

Prediction: Should be a goal-fest on some nights and tight defence-low-scoring on others. Colorado should hold the physical edge. They will need to bang around Detroits' d-men and use their speed to control the play. We all know that Detroit is a puck possession team. Imagine how much of a difference powerplays are going to make in this series compared to the other 3. Well, I'd imagine the Pens-Rangers series will be a lot of the same.
I say Avs take this series in 6.

Sharks vs Stars
It is very tough to bet against the Stars right now, as they are on a mission. I thought the Sharks bumbled their way through the Calgary series and were terribly inconsistent. That won't fly against a Stars team that doesn't let up.
When will Brian Campbell break out? Michalek? Can we see consistency out of Thornton?
These 2 teams are a lot alike and the games will probably be decided by one goal almost every time. It would be cool to see at least 3 OT games here.
The season series was split in half, with each team winning 4 games. the biggest difference now is that the Stars have pushed it into 4th gear, even without Zubov and Boucher, while the Sharks have not done that yet. San Jose will learn early to do so.

Prediction: I'm not impressed with the Sharks because of their inconsistency and cannot predict them to go any further, even though I'd rather see them advance than Dallas.
Stars in 5. How's that for bold?

My predictions so far: 6 correct, 2 wrong. Fuck Bob McKenzie. He can cry about predictions all he wants. I just find it fun.
Here's how I line up with the famed TSN staff's predictions: 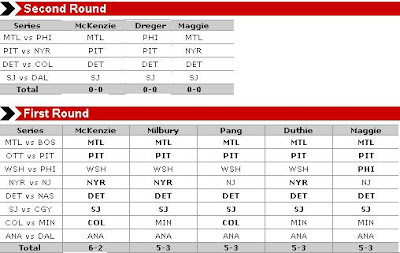 Anyone else wanna throw predictions out there?