Share All sharing options for: Playoff Matchups and Predictions 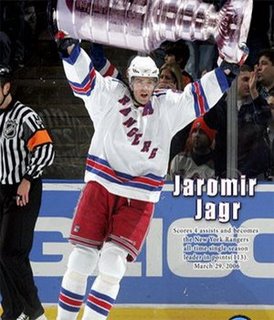 In all of my infinite wisdom, I will now predict Round 1 of the playoffs. Keep in mind that I am calling a Rangers-Sharks Final, if you can believe that. And yes, I'm on the Sharks bandwagon.

1. Red Wings-Predators. The Preds are not to be underestimated as they proved themselves as a good team late in the season. I don't think the Wings will have a cakewalk here, but I do think they have better depth at all positions. I say Wings take this one in 7 games.


2. Sharks-Flames. No love for Calgary here. They are just way too inconsistent for my liking, where San Jose is a force to be reckoned with. Joe Thornton needs to prove himself in the playoffs, and I agree with PJ Stock, who today said that Thornton WILL. Sharks in 6.

3. Wild-Avalanche. Where is the Wild's secondary scoring? They have it in very inconsistent bunches. Cover Gaborik-Demitra-Rolston and that should be it. The Avs are rolling and are good as long as Forsberg holds up. Avalanche in 6.

4. Ducks-Stars. A big question going in to the Ducks' postseason is "are they still hungry after winning the Cup last year?" That will be the big question. Dallas is having injury problems with Sergei Zubov gone indefinitely and Brad Richards nursing an undisclosed injury or illness. Richards has not put up the points consistently either, and has been a non-factor offensively since his first game as a Star. I pick the Ducks to take this in 6.

These predictions would mean a Wings-Avalanche and Ducks-Sharks Conference Final. Who wouldn't want to see that?

1. Canadiens-Bruins. The banged up Bruins suprised everybody but me this season by making the playoffs. However, they should hit a brick wall against a hot and rolling Habs team. Savard is not 100% with his back...A Bruins win would be a huge upset. I say Habs in 5. Sorry JimBuff.

2. Penguins-Senators. There are far too many question marks surrounding this Ottawa team: Goaltending, injuries, chemistry..... The Pens are cooking right now and I say they steamroll the Sens in 4 straight to put Ottawa out of their misery, and to get revenge for last year, where the Sens swept the Pens (I called that one).

3. Capitals-Flyers. The Caps are the hottest team in the NHL going into the playoffs (9-1 in their last 10.) But the Flyers aren't that bad. They are 7-2-1 in their last 10. I think this series will be close, but Ovechkin and company should squeeze a series win in 7 games. This series is the toughest to predict, in my opinion, and I'm torn on it. If you can shut down Ovechkin, are Fedorov and Semin going to consistently pick up the slack? The Flyers have great scoring depth, but are hurting a bit with Briere and Jason Smith being doubtful for game 1. Check that, Briere may just be ready after all.
I think you can almost bank on Huet being better than Biron in this one.

4. Devils-Rangers. I continually underestimate the Devils, and will do so again this year to a point. They don't have the offensive firepower that the Rangers have, but they have the best damned goalie in the world and a stingy defensive system. But now with Jagr going again.....Rangers in 7.

I hope these predictions come true because in this case The Caps and Ovechkin would play the Penguins and Crosby in the next round.
On top of that, Two original 6 teams would play eachother in Montreal and the Rangers. Awesome! Hope this goes down.

What are your opinions? (No Matt, the Flames are going nowhere....simmer down :)
Think I'm full of shit? To brag a bit, I went 11 correct and 4 wrong when it came to predicting series outcomes last season, so you should trust my opinion! ha!