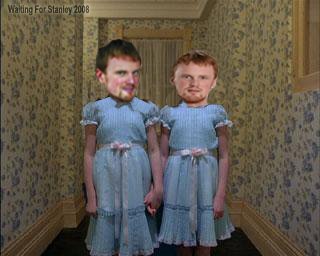 I didn't even watch the 7-1 drubbing by the Flames last night as I entered a poker tournament instead, with the game on in the background. Ha, I finished 4th out of 18. Seeing the score of the game, I'm glad I missed it.
I have to agree with Rogene from the site Real Tech Solutions, who commented earlier about feeling positive about the offseason and what Dave Nonis is going to do to improve this team.
Obviously, an overhaul is not going to happen, as Nonis must be focussed on winning as long as Roberto Luongo is signed (which is for 2 more years).
I think it's pretty fair to say that Markus Naslund is done as a Canuck. His performance was not good enough to justify his $6 million contract. He would have to settle for less to remain a Canuck, and that is not going to happen. Watch him go to Colorado to play with Forsberg! OK, maybe not. Either way, Nazzy is and should be done in Vancouver. He is not the clutch player that we need.
What about Brendan Morrison? His $3.2 million contract is almost justifiable. He can average about .65 points per game and has more heart than all of our Swedish forwards put together. He is a toss up to me, as far as keeping him around goes.
Byron Ritchie? I'd keep him, at $675,000 per year. He is a good penalty killer and always shows hustle.
Brad Isbister? Bye-bye. Not good enough.
Ryan Shannon? Seems to have some potential. He is currently making $550,000 and will ask for a little more. But I wouldn't pay him more than $1 million. Then again, he did have 13 points in 26 games. He may demand more.
Curtis Sanford? His time may be over, as Drew MacIntyre should be Louie's backup.
Trevor Linden? I'm not a Linden homer as much as most Canuck fans, but management's plans for him will be to not re-sign him and give him a job upstairs. I think he could still keep playing regardless. He's a good leader on the ice still, even though his scoring touch has evaporated for the mostpart. Won't happen though.
Aaron Miller needs to be re-signed. He was a stable force on defence all year when healthy. His experience is needed.
So what can Nonis possibly acquire with the money he saves on Naslund and maybe Morrison, which is almost $10 million?
Here are some names of potentially available Unrestricted Free Agents: 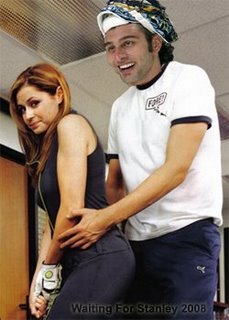 -Michael Ryder. I'm concerned about his inconsistency, but he is a sniper. His $2.9 million salary is borderline scary considering his inconsistency.
-David Legwand. See Demitra. The guy is more fragile than a cheap piece of china.
-Jay Pandolfo. Absolutely, but not a top 6 guy though.
-Fedotenko, Vasicek and Satan. Nope. All Euros and all sucky.
-Brendan Shanahan. Would he actually sign here? Probably going to retire.
-Martin Straka. Injury prone.
-Cory Stillman. At $1.75 million he is a steal. 35 years old.
-Vaclav Prospal. Shit, how many Euros are there anyway? He is a finisher, but too inconsistent. He is playing better in recent years than he ever has though.
-Marian Hossa. Not a damned chance. Please go away. Skilled and gutless. Last thing we need more of.
-Curtis Brown. A good replacement for Morrison? Not unless you like going all in with pocket 2's.
-Mats Sundin. It would be a dream, but it's not happening.
-John Pohl. OK, out of the caliber of the above, but I like this kid.

Here are some potential restricted free agents to pursue:

-Tuomo Ruutu. A gritty bastard, but an anomoly offensively. Pass.
-Corey Perry. May cost too much, and I can see the Ducks matching any offer.
-Steve Bernier. Currently $850,000 and is showing some great signs in Buffalo. I can see the Sabres signing him. He fits in there, but I'd like to see him here.
-Patrick Eaves. Definitely, minus the injury issues.
-Patrick Sharp. He is going to want a serious raise after this season. When he gets the dough he'll probably slump or get a long-term injury. Only 27 years of age, but his career stats kind of prove my point.
-Wojtek Wolski and Marek Svatos. Yes and yes.
-Jarret Stoll. Nah, no Oilers allowed on our team.
-Patrick O'Sullivan. Due for a decent raise after this season. I'm in. He's good.
-Pierre-Marc Bouchard. No. Not another softy on our team. Never trust a guy with 2 first names!
-Jeff Tambellini. Has potential....and family connections.
-Jeff Carter and RJ Umberger. Didn't we trade Umberger for Martin Rucinsky once? Well I'd take him and Carter.
-Joe Pavelski. Oh yeah. Serious upside.
-Matt Stajan and Kyle Wellwood. Lack of size with both players, but I wouldn't mind seeing them in Canucks jerseys.

Even though it may not seem like it with all the injuries, the Canucks have plenty of defencemen. Nonis may offer up 1 or 2 to acquire help up front. This is quite likely to happen.
Speaking of defencemen, here are some numbers to throw at you about the Canucks D corps:

Here are some other stats of the disturbing nature:

The Sedins averaged about 1 minute extra per game this year over last year. As mediocre as they can be at times, they still need help....or Anson Carter. Ha! Bring him back from Europe!

The positives are found in guys like Ryan Kesler: 21 goals and 37 points this year and an average of 19:03 played per game. Last year, Kesler was injured for about half the year, playing only 48 games, scoring 6 goals and 16 points and averaging 16:25 of icetime per game.
Alex Burrows scored 12 goals and 31 points in 82 games this year. He averaged 15:05 of icetime per game. Last season, the pest had 3 goals and 9 points in 81 games. He averaged 11:26 of icetime in 2006-07. Nice to see Kesler and Burrows excel in their new and increased roles. 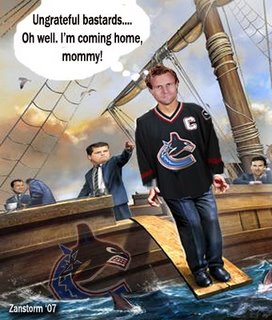 You would have to describe Roberto Luongo's season using the following phrases: decent, stellar at times, shakey at times, roller coaster, not-so Vezina-like, distracted, no support. His stats from this season and last season are not overly different except in the win category: 35 wins in 73 games this year and 47 wins in 76 games last year. Luongo will rebound next year.

So there is room for optimism. And no, the GM and coach do not deserve to be fired. So whoever is saying that needs to give their head a shake. Nonis' real test comes right now. He needs to rid us of Naslund and his $6 million salary (I've been waiting for this to happen since Bertuzzi left) and make a decision with Morrison. With the money he will have saved, he needs to get players with more size and scoring touch yet are defensively responsible. You know what? I trust that he will.
Alain Vigneault's style may be boring, but he didn't win coach of the year last year for nothing. The Canucks showed signs of past time Canucks in their defensive lapses this season, but I still think the players trust that Viggy's way is right, and Nonis also has to bring in guys that will buy into this system.
Until then, it was just another year in Canucksville waiting for stanley.... and the waiting ensues.

If you missed the minor tribute yet great ovation for Linden after last night's game, check out the clip below. Nice to see the Flames show some class there.