Share All sharing options for: Live-blogging the Canucks-Oilers game 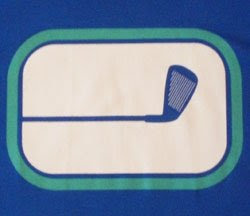 Ah, the negativity surrounding the Canucks re-ensues as the Oilers come to the Garage to try to play Spoilers tonight. To prove the negativity up here in Smithers I posted the pic to the left. It was from a great Canucks fan who is also my cousin. But don't great Canucks fans hang in there with their team until the very end? I know Mr. Positivity is hangin', so everybody jump back on board until this game is over.
Go Blues and Go Nucks!

- 3-2 Preds with 13:00 left. Can you believe it? Jan Hlavac is back to haunt his old team. 3 assists for the inconsistent homeless one. This is terrible.

The Preds have won 3-2. So now you got to think the Canucks know this fact, and it will be interesting to see how they respond. We will now hope for the Nucks to win out the season and for the Hawks to pummel those damned Preds tomorrow night. Will the Preds' back-to-back games play any role? The Hawks killed the Wings in their last game. The Preds-Hawks game will be in Chicago.

- the Canucks looked focussed pregame and now nervous to start. The Oilers have nothing to lose and the pressure is on Vancouver. Let's see if that plays a role.

10:53- Yeah, the Oilers are playing loose and the Canucks look tight. Vancouver blew it's first power play chance. Look at the Oilers making those long breakout passes....
It looks like Rick Rypien has changed the tide a bit by having a huge shift and smoking every Oiler he saw, and then drawing a penalty. Nice!
The Canucks look great on this PP, and then Pitkanen takes a penalty on Hank. 5-on-3! C'mon! Bag one!
-Oh shit, Roloson looks awesome to start. 3 big saves early on the 5-on-3. No doing on the PP's.
6:40- I have to say that Markus Naslund is alive tonight. He is playing with a vengeance. The shots are 8-0 Vancouver. Hey, that's almost the score of the Leafs-Sens game! (Gutless, quitter Leafs.)
End of Period 1- Lots of chances for the Nucks but no finish. The story of the year isn't it?
I like seeing the Nucks block alot of shots, like on the Oilers' PP. Guys like Mitchell, Ritchie and Pettinger are sacrificing their bodies out there.
Not a lot of great chances for Edmonton of their 7 shots. Vancouver is playing fairly well defensively.
Shots after 1: Canucks 12 Oilers 7.

18:40- The Canucks are now 0-for-4 on the PP. Not cool I say. These guys score about as much as Ugly Betty.
A few minutes later and the overall shots are 18-7 Vancouver. Rolie Polie is playing super.

-Marty Reasoner has just made 1-0 Oilers. FUUUUUUCK!!! See the look on Vigneault's face? He looks like he just shit his pants and is hoping nobody smells it. Or his face looks like a deer in traffic for all you Christians reading this. Deflating. Kind of a flukey bounce goal, but almost expected the way this one is going.
One of 2 things can happen now. The Canucks can keep their cool and try tie it, or the Oilers are going to blow these guys out.
- Matt Roy just got a 5 minute major for boarding Mike Weaver. Nasty hit. Can the Canucks take over here? It will be a travesty if they don't score. Pressure's on!
-See Roloson bat the puck out of the air? He's ultra confident right now and looks like he's going to stop every shot that comes his way. That means the Nucks have to put more traffic in front of him.
-Canucks are 0-for-5 on the PP. A wasted chance again. Roloson is a stoner! And now they are getting another chance on the PP.
-Another blown PP after that, and Linden gets a slashing penalty. The Oilers get 2 glorious chances to score right away on the PP and score on the 2nd one. 2-0 Oilers. Jarret fucking Stool.
I was getting really tired of watching our Swedish trio suck it on the powerplay anyways. Bunch of perimeter-useless tits! Crash the net you shits!!! The only goal going past Roli tonight is a screen or garbage goal.
-The Canucks get boo'ed off the ice when the 2nd period ends. No shit! This is nasty stuff. This effort is not good enough. Sure the shots are 24-13 and Roloson is to be credited, but I'm not seeing desperation hockey. See Reasoner's goal? Crash the net-garbage goal. That's desperation.
-Anyone else notice that Kesler and Burrows are invisible tonight?

- Tough to watch, huh? I'm drinking beer but should have shot a 26-er of Captain Morgan's instead. Quick fix. Complete drunk. All I'm doing now is drinking beer, typing, crying and pissing. Why does beer flow though you so fast? Make you piss like a race horse?
Oh yeah, there's a game on.... I'm looking down the bench for a hero and all I see is a bunch of jobbers. Larscheid just mentioned the lack of desperation by Vancouver....way ahead of you, Tommy-boy. Story of the night.
12:20- At least the Canucks are crashing the net more now, but it's a little late for that.
9:40- A close-up of Trevor Linden's face shows disappointment yet a sign of no-quit. This is almost it for Trevor and it's a sad tale.
-Another Canucks PP coming up, but they are 0-for-7 tonight. The crowd gives a big rallying cheer as the PP starts. ALEX BURROWS HAS JUST SCORED A GARBAGE GOAL!!!!! 2-1!! Thank GAAAWWWD!! This will be a great finish.
"Hold on! We're coming back!" says Larschied. The Canucks are going now! Leave it to the Can-US line to bag one at a critical time.
-The Canucks press, but generate nothing for a few minutes. The Oilers have a tenacious forecheck going and it's causing headaches for the Canucks to break out of their zone.
- 2 minutes left....this sucks. Oh! And Henrik "Captain Hook" gets a hooking call with under 2 left. Asshole! Mindless fuck!
-1 minute left, Luongo is pulled to even up, but the Canucks can't generate anything. Now Edler takes a slashing penalty on Reasoner, who was going to score into the open net. It's over in 10-9-8-7-6-5-4-3-2-1.......
It's easy to blame Henrik for the loss here, but realistically, the Canucks team is to be blamed. They have not been good enough in the final quarter of the season, and fittingly didn't make the playoffs. I was hoping they'd get into the playoffs and "we'll see what happens", but this is a fate that they deserved.
All I can say now is: Go Sharks! I'm on the San Jose wagon no doubt. I'll root for the Capitals in the East if they make it, but also the Rangers just because I'm picking a Sharks-Rangers final and I want to be right. 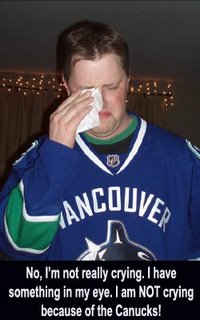 The questions surrounding the Canucks free agents now become front and center. Is this the last we'll see of Morrison and Naslund after the Flames game? Probably yes as far as Naslund goes. I won't miss him. Nice guy, but not good enough at his price.

Naslund post game: "Very disappointed. If we don't win these games then we don't believe to be there (playoffs)."
"We haven't been a sharp team when it counted."
"Obviously something is missing here (with the team)"

Linden post game: "Oilers did a good job defending."
"We executed the way we wanted to but didn't get the results." (bullshit)

Dan Sedin: "We can only blame ourselves."
"If you get 38 shots you should get more than 1 goal."

-Geez, only Naslund and Dank kept it real post game. Good in the locker room in front of reporters, but shitty on the ice.

Luongo post game: "It's tough to take right now."
Louie was sniffling a lot, like he was sick or crying.
"Emotionally it's been a rough couple of weeks...a lot of highs and lows."
"As far as my play...hardest season I've played for many reasons and not just the ones that you guys (media) think."
Louie was quite emotional and angered during his interview.

How are you Canucks fans holding up? Who are you cheering for now? Are you still going to watch the playoffs? 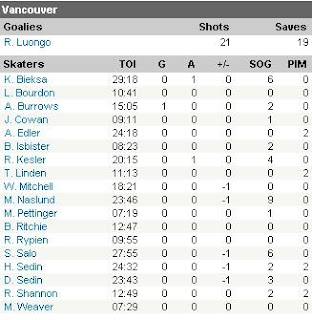