It could all come down to tonight

Share All sharing options for: It could all come down to tonight 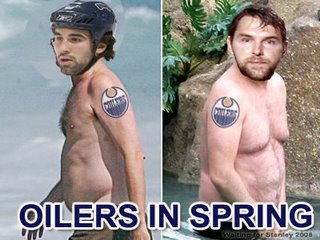 Oh yeah, I can make a mockery Photoshop of the Oilers over and over again and poke fun at the bastards, but in reality, I have a lot of respect for this team that was doomed to fade away and die this year. The Oilers, with a lot of help from shootout wins, just about managed a playoff berth to pull off the unthinkable. A respectable feat this season was for them.
But tonight's game is all about business, not respect. Tonight, Canucks and Canuck fans alike could lay their heads on their pillows in shame and defeat or they could stay up a little later with happy thoughts of grand possibilities of making the playoffs. A win by Nashville and a Canucks loss will eliminate us. Simple as that.
The Canucks know they have to win and are throwing all the cliches around to the media. Let's just say there will be some extra motivation if they see on the scoreboard that the Blues defeated the Predators tonight (or even vice versa). That game will end at about 7:30 pm, right when the Canucks hit the ice.
Are you feeling at all positive? It's tough to be after that Colorado loss isn't it? Luongo is not that sharp lately, the Canucks have lost 4 of 5 (the Preds are the polar opposite), and the injury bug strikes again. Taylor Pyatt will not play tonight as he suffered a concussion from that hit in the corner last game from Jeff (pull my) Finger. As much as I liked Pyatt's gritty efforts lately, he hasn't been scoring enough. So let's see somebody else step it up.

Oiler notes: Alice in Hemskyland (knee) will not play tonight. Kyle Brodziak is out as well with a broken finger. Excellent. Now, can someone please shadow this Glencross guy? He's fucking dangerous, and red hot at the moment!

Is St. Louis up to the task of gaining revenge for a 3-goal blown lead against the Preds a couple of nights ago? It's possible. But without any logic whatsoever, I think the Preds will beat the Blues and the Canucks will beat the Coilers 2-1. I think this is going down to the last game of the season where Mr. Positivity returns. And he says the Hawks beat the Preds and Canucks beat the Flames so Vancouver gets into the playoffs. Is there any other way to think? May as well stay positive right to the end.

**UPDATE**
Apparently Matt Pettinger is sick, so the great Jannik Hansen has been called up from Manitoba. There are stipulations, according to TSN:

Vancouver had previously used up all of its recalls. Both players will take the pre-game skate so if Pettinger is able to play then Hansen is ineligible to play. Expect Hansen to play because with Taylor Pyatt out the Canucks desperately need another top-six forward. They also want Rypien in the lineup because of the physical factor.