How my (and other) pre season predictions panned out

Share All sharing options for: How my (and other) pre season predictions panned out

With the NHL regular season over, I figured I'd post the predictions for the 2007-08 season by The Hockey News, McKeen's and myself and compare who was closer. (Click spreadsheet to enlarge) 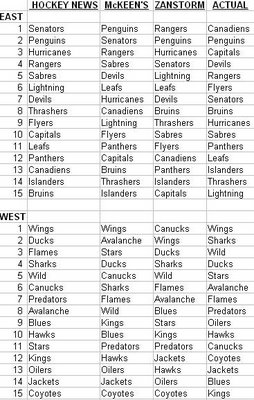 Mostly, I have to apologize to Caps owner Ted Leonosis, because I picked his team to falter, yet they made the playoffs. I also hacked him for his UFA signings last summer (Kozlov, Poti, Nylander). I more or less stand by that hacking, however his acquisitions of Cooke, Fedorov and especially Huet really paid off down the stretch. Way to go McPhee and Leonosis!

So who's a better predictor, the pro's or me? Let's crunch a few numbers shall we?

Predictions that were:
Bang on:
McKeen's: 4
The Hockey News: 3
Zanstorm: 3

So yeah, I'm the Champ! haha. Next up will be playoff predictions!