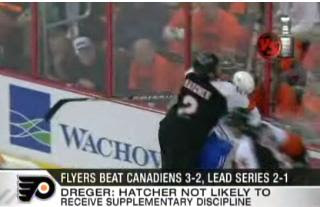 Don Cherry almost took the words right out of my mouth after the Habs game when he said that he was going to do a feature on the brilliant defensive play of Derian Hatcher, only to have the colossal defender almost turn Francis Boullion's head into a cube and almost costing the Flyers Game 3. Moments before the boarding penalty I was actually saying to Temujin how good Hatcher has been in these playoffs. Sometimes I don't watch the puck or puck carrier on the t.v. screen. I'll watch the people behind the play or away from the puck. I've noticed that Hatcher is playing positionally very well in order to compensate for his lack of speed. He blocks shots. He makes people pay with crunching hits in the defensive zone. He has no fear.
It's this kind of play that may be the Habs' undoing. The Flyers are picking on the dingle-dangle smaller skilled players and putting fear into them. We'll see if this continues to keep the Kostitsyns and Kovalev off the scoresheet most of the time.
Yeah, Hatcher can be a goon at times, and he really lost his marbles by running Boullion that late in the game with a 3-0 lead. The media is bashing him for it.
But I'm willing to look past that and acknowledge Hatcher's great play. He is a leader back there in many different ways.
Oh....and don't forget.... he is the only non-Canadian captain in NHL history to hoist the Stanley Cup.

-Hatcher nails Alex Steen AND his own teammate Lupul. Boooom!

- Hatcher breaks fellow American Jeremy Roenick's jaw in 1999.
So what are your thoughts about the Habs' chances in this series? Is Carey Price, the 20 year-old goalie sensation going to rebound after a somewhat shakey game 3? (No, he could NOT see 2 of those goals against.) Screen-city. The Canadiens coaching staff said that he was "rattled" after last game, but defended him because he is so young and has a lot of pressure being put on him.
The Flyers are playing physical, yet not disciplined enough. Bt I think they have the recipe to beat Montreal. Added to their fortunes is that Mike Knuble will return to their lineup on Tuesday. That is a big lift, especially on the power play.